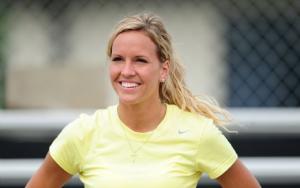 Ashley Harlan was born on July 24, 1983 in New Castle, Pennsylvania. Ashley Harlan is known for being the wife of a well-known quarterback who plays for the NFL team the Pittsburgh Steelers. As a result of her marriage to Ben Roethlisberger in 2011, she legally changed her name to Ashley Roethlisberger.

Ashley was born to her father, David W. Harlan and her mother, Jeannie Harlan. She grew up with her three siblings. Ashley attended Laurel High school in 2004. She showed great interest towards a variety of different sports such as basketball, softball, and volleyball. It’s no wonder why she was so attracted to her future husband, Ben. She definitely was an athletic student growing up and was into men that shared her same interests.

After she graduated from high school. she furthered her education at St. Francis University and she went on to play softball, Ashely excelled in softball and found a single sport that she could put all her focus on. She graduated from the university in 2009. Surprisingly, Ashley was not just a sports freak as one might think. She was also part of the honor program at her school and she was an All American scholar-athlete. It is quite understandable why Ben fell in love when he laid his eyes on her. What man would deny the company of a girl who enjoys sports as much as himself? Ashley is in the truest sense, a great example of the phrase, “beauty with brains”.

Ashely did not end up becoming an athlete as her final destination. Ashley now works as a physician’s assistant in Pittsburgh. It was a linear move in her life, considering that she studied nursing when she was attending college. She graduated with a degree in Health Science in 2008. But she didn't stop there. She went on to pursue a master’s degree in medicine, which she eventually got in 2011. With all her degrees, it was easy for her to get a job. She managed to land a job in the cardiac surgery department. She occupies this position at the Presbyterian Hospital in Pittsburgh. She can enjoy helping people and not worry about finances as she is married to an American football star worth millions of dollars and her personal net worth is estimated at five hundred thousand dollars.

Life with a Famous Quarterback

Ashley and Ben go way back, starting when they first met in 2005 at a NFL training camp. Before their meeting, Big Ben was known for his playboy tendencies but something in Ashley made him change and straightened him out.

After some nasty episode involving court case accusations of rape against him in 2008 and 2010, Big Ben pulled himself together and went to Ashley again. The two had been dating on and off but it looked like Ben turned to Ashely when he was finally ready to settle down. The two were in love but it wasn’t until the 23rd of July, 2011 when they finally committed and decided to exchange vows with marriage. It was a summer wedding held in Pittsburgh, Pennsylvania. They didn’t live together prior to their marriage because they are both devout Christians. Out of respect to their beliefs, they decided it was moral to live separately until they became a family.