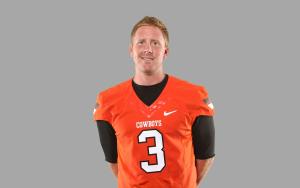 Brandon Kyle Weeden, currently at the age of 32 is an American football player, who was born on the 14th of October, 1983. He was born in the city of Oklahoma, located in the state of Oklahoma in the United States of America. He’s also got a Twitter page set up where he keeps his 80 thousands followers posted about his daily life.  He occupies the position of quarterback.

Back when he was attending the Edmond Santa Fe High School, Brandon managed to lead his team to victory in the semifinal games. He was a quarterback and he got to be the MVP of the team and he won the Offensive Player of the Year award. He was also named an All-State in football with 2863 passing yards and 25 touchdowns that year.

His college football career began when he attended the Oklahoma State University. For eligibility purposes he redshirted his first year. During the following year of 2008, Brandon only played one game. In the 2009 season he played in a total of three games and managed to lead the team to an impressive 11-point comeback win against Colorado. The game was also televised on a national level.

Interestingly enough, Weeden was drafted in the 2002 Major League Baseball draft by the team of the New York Yankees. He was even their first selection in that year’s draft. He stayed with the Yankees for a year and he was traded to the Dodgers of Los Angeles. He played for the Dodgers for 2 years and back in 2005 he was drafted by the Royals of Kansas City. However, he suffered some injuries which eventually led him to quit baseball.

Brandon’s professional football career took off in 2012 when he was drafted by the Cleveland Browns. He was the 22nd overall pick and he managed to become the oldest player to be drafted in the first round. He was 28 years old back at the days. He had a rocky start in the 2012 season, having the sixth lowest passer’s rating. One week into the season however, he managed to throw for 2 touchdowns, he got 26 passes out of 37 attempts for an overall of 322 yards.

Weeden got a two-year contract with the Dallas Cowboys on the 17th of March, 2014. He was even promoted to the position of a backup quarterback. During the 8th week of the season he got the starting position because of a back injury of Tony Romo. Brandon’s career stats include 941 passing attempts and 544 accomplished passes which gives him a total of 57.8% success rate.

Melanie Meuser used to be Brandon’s longtime girlfriend. They got married in the summer of 2009. They have a son whose name is Cooper. Interestingly enough Brandon and Melanie came back to the city of Oklahoma after a failed career in professional baseball. As a surprise to most, especially to Melanie, Weeden set his sights on football and a couple of years later he was already a starting quarterback in the NFL.

FAQ: How old is Brandon Weeden?