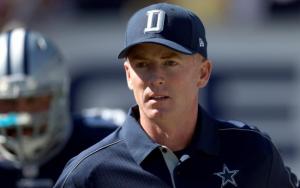 Jason Calvin Garrett popularly called Jason Garrett as born on March 28, 1966 at Abington, Pennsylvania, United States of America. Born to Jim Garrett and his wife, Jason is one of the three sons of the Garrett family, the other three brothers of Jason being Jim Garrett III, John Garrett and Judd Garrett. In his early days, Garrett studied at prep school at University School in Hunting Valley, Ohio. He played a letterman in football, basketball and baseball in the respective school teams. In football, Garrett won the All-League championship as a quarterback and a safety player. Jason Garrett graduated from the University School in the year 1984.

Jason Garrett attended college at Princeton University where he started playing for the university team. But owing to his father’s serving as the head coach of the Columbia University team, Jason was transferred to Columbia University. Following the unfortunate and humiliating loss of Columbia University team, Jim Garrett resigned from his post as the head coach in the year 1985. Following this, Jason and his brothers transferred back to the Princeton University. Jason completed a record total of 366 passes out of 550 passes, in the two years at Princeton i.e. 1987 and 1988, a whopping 66.5 percent, and helped his team win the Asa S. Bushnell Cup. Jason’s efforts and excellent play were noticed and he was awarded the Ivy League Player. In 1988, his team though suffered a loss to his erstwhile team at Columbia. Jason earned a Degree in History in the year 1989 from Princeton.

In the year 1989, Jason Garrett was signed a free agent with the New Orleans Saints, which marked the start of his professional career. In 1991, Jason was signed a quarterback for the San Antonio Riders for the World League of American Football. However, unfortunately though Jason suffered a shoulder injury in the season opener and missed many matches, however he returned later in the season but was replaced in the line-up. In the year 1991, Jason played for the Ottawa Rough Riders of the Canadian football league. He then joined the Dallas Cowboys in the year 1993 as a third choice backup in the 1993 and 1995 Super Bowl winning teams. He played in 39 games for the DALLAS Cowboys where he completed 165 of 294 passes. His notable performance was on the Thanksgiving Day match in the year 1994 where he completed 15 of 26 passes along with 2 touchdowns to stage a remarkable comeback in the second half of the game.  The game was declared as the fourth-best moment in the history of the Texas Stadium by ESPN. Jason was promoted to second string quarterback for the 1998 and 1999 seasons. In the year 2000, Jason moved to the New York Giants where he played until 2003. In the year 2004, he then moved to the Tampa Bay Buccaneers for a short stint and finally moved to the Miami Dolphins.

Jason after a long journey as a player took retirement to become the quarterback coach for the Miami Dolphins in 2005-06. He then was hired by the Dallas Cowboys as an offensive coach in 2007. His salary for the 2008 season as per the contract with the Dallas was about $ 3 Million. In the year 2010 he was named as the Dallas head coach till date.

Jason is married and lives happily with his wife Brill in Dallas currently.

FAQ: How old is Jason Garrett?