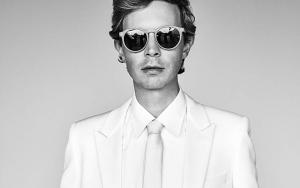 Beck is an American musician, singer, songwriter, rapper, and producer who was born on July 8, 1970, in Los Angeles, California, in the United States. His birth name is Beck David Campbell but he goes by the shortened version "Beck". He grew up in California with his Canadian father who was a composer and conductor named David Campbell. His mother was an American visual artist named Bibbe Hansen who was raised in the Andy Warhol era of the 1960s. Beck grew up in a lower-class family and his parents separated when he was ten. He then went to live with his mother and brother in Los Angeles. The city has a large influence on his diverse styles of music later in his life. Beck dropped out of high school and began as a folk musician who played country blues, Delta blues, and other traditional styles.

Beck joined a group of acoustic musicians in the 1990s who were outside the mainstream. He began writing music and performing a wider range of styles. He even released a hip hop track called "Loser" as an experimental piece. He eventually went back to his folk roots and released hit songs with K Records and Geffen Records. Beck married American actress Marissa Ribisi in 2004 and the couple has a son and a daughter together.