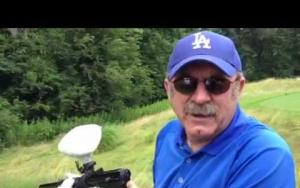 Bob Kevoian is known as a retired American radio host. He is most famous for hosting The Bob & Tom Show along with his partner, Tom Griswold.

Robert James “Bob” Kevoian was born on December 2, 1950 in Los Angeles, California His father’s name is John Hike while his mother is Jean Baker. His mother was on the game show, Let's Make a Deal and she won a Brunswick Pool table. She traded the award for an oyster stew. She retired from the Los Angeles County Office of Education in Downey, California His younger brother is Peter Kevoian, who is an actor.

Bob attended California State University at Long Beach and graduated in 1973. In 1974, he went for his master’s degree but didn’t finish it because he was working as an intern for a local Los Angeles radio station. At Central Michigan University, he was awarded an honorary doctorate in communications. He gave a commencement speech at the university in 2003.

Bob is married to Becky and they have a son named Toby and stepsons named Joey and Wade from Becky's previous marriage. His wife’s brother is a popular tuba player. He got married to Becky Martin on April 2, 2005.

For three years, Bob Kevoian toured the United State as a sound engineer for the Young Americans. In 1979, his radio career began at the WMBN station in Petoskey, Michigan. His career at the radio station lasted for three years. That went on until 1982 when Kevoian joined cross-town WJML.

He later teamed up with Tom Griswold for the daily morning show, Tom and Bob. They met when Kevoian worked two jobs as a bartender at Harbor Springs, "Tom came in after a J. Geils concert at Castle Farms in Charlevoix and ordered a drink. At the end of the bar was another guy who worked in Country radio. Tom overheard us and asked if we worked on radio and I told him I was doing midday. Tom said he did a year of radio in Florida, but was out of work and wanted to visit the station and look at the trades."

This show lasted for twelve and a half years. This combination was a huge success for a morning show.

Bob is a recipient of various awards and honors, which included the five Marconi Awards. He was inducted alongside Tom Griswold to the National Radio Hall of Fame in 2015. This took place at the Museum of Broadcast Communication in Chicago. It was on this occasion that he announced that he would be retiring as a radio host at the end of the year. His last live show as co-host was broadcast on December 17, 2015. On November 17, 2016, Bob and Tom were brought together again when they were entered into the Indiana Broadcasters Hall of Fame.

FAQ: How old is Bob Kevoian?