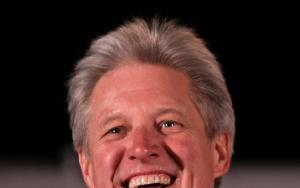 Bruce Boxleitner is known as an American actor and writer. He is most famous for his roles in How the West was Won, Babylon 5, and Tron.

Bruce Boxleitner was born in Elgin, Illinois. He is the son of a certified public accountant. He attended Prospect High School in Mount Prospect, Illinois and later he graduated from the Goodman Theater School of Drama of the Art Institute of Chicago. Boxleitner received his formal acting training on the theater stage. He is an alumnus of Chicago's prestigious Goodman Theatre.

Bruce's first marriage was to Kathyrn Holcomb, an American actress. They both acted in the film, How The West Was Won and later their romance began. She was starring as his younger sister in the film. He said that he was smitten by her at first sight but she was dating someone at that time. Kathryn took him to her doctor and Bruce was given a shot. She invited Bruce to her home and put him in the bathtub to cool his body. Her lover entered the house at that time and thought that Kathryn was having an affair with Bruce.

She broke the relationship with her boyfriend and eventually started dating Bruce. They got married in 1977 and Kathyrn gave birth to their two sons Sam and Lee, however, their marriage lasted for only ten years. In 1987, Holcomb broke the marriage and got married to Ian Ogilvy, a British actor, who guest-starred on a series that Bruce was also on Babylon 5.

In 1995, Bruce got married to his second wife, Melissa Gilbert, an American actress. Gilbert had guest-starred as Boxleitner's on-screen wife, Anna Sheridan, during Season 3 of Babylon 5. Melissa and Bruce met on a blind date set up by his ex-wife, Kathryn. They dated for about a year and were engaged twice before finally walking down the aisle. Melissa and Bruce have a son together. After sixteen years, their marriage ended in 2011 with a divorce. They shared custody of their son and Mellissa sought spousal support.

FAQ: How old is Bruce Boxleitner?

FAQ: What is Bruce Boxleitner networth in 2020?