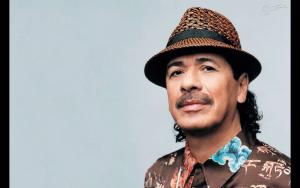 Carlos Santana was born on 20th July 1947, in Autlan de Navarro, Jalisco, Mexico. His younger brother, Jorge Santana, is a professional guitarist. An American and Mexican musician, Carlos rose to fame in the 1960’s and early 70’s due to his band being named Santana.In his youth, he studied at James Lick Middle School, and in 1965 he graduated from Mission High School. Carlos was later accepted at Humboldt State University and California State University, Northridge, but he had turned down these offers.

Their band, Santana was the first to start a fusion of Latin American and rock fusion music. Carlos Santana is a guitarist who plays blue-based tunes which are reminiscent of Latin and African rhymes with a hint of jazz fusion.

He has many awards and recognitions to his credit including ten Grammy Awards. Rolling Stones magazine had at one time considered him to be ranked at number twenty in its list of top 100 guitarists of all times. He has also won three Latin Grammy Awards in addition to the ten Grammy Awards given within the United States. He is among one of the richest singing sensations with a net worth of over $40 million dollars.

Music started for Santana at the age of five where he learned to play both the violin at age five, followed by the guitar at the age of eight under the instruction of his Father who was a mariachi musician and fourth generation musician. During this time, his brother also played the guitar which would lead him later to fame. In his youth, Santana was greatly influenced by Ritchie Valens in a time when there were very few Mexican Rock or Pop artists contributing to the music industry.

In 1955, his family moved from the small village Autlan de Navarro to Tijuana and later to San Francisco in 1960. In 1965 Santana graduated from Mission High School and was accepted to California State University, Northridge and Humboldt State Unversity, but despite being accepted to prestigious schools, he decided not to attend any of them.

As a teenager, he performed in Tijuana strip clubs. Artists such as B.B. King, Little Richard, and Ray Charles had a lasting effect on him and his playing style, and musical interests. Living in San Francisco, Santana had the chance to see his inspiring idols like B.B. King live on the stage. Influenced by many different genres, rock was only but the beginning and with it Jazz and International Folk Music helped to tune his originality.

After years as a dishwasher in a diner and playing for spare change as a street musician, Santana made his decision to become a musician and attempt to debut. In 1966 Santana Blues Band was born and with his street performing friends Gregg Rolie on the keyboard and David Brown as bassist, they had no idea how famous they would become.

The group first played at the Woodstock Festival in 1969 the same year their self-titled LP came out, the result of signing on with Columbia Records. This was the first of Santana’s top 10 hits called, “Evil Ways” the disk stayed on the billboards for two consecutive years and was soon followed by two other great classics. Since then, Santana sold over 100 million records and performed for more than 100 million fans worldwide.

Throughout the ‘70s and ‘80s, Santana released one successful album after the next, Abraxas, Amigos, and Lotus. With Supernatural winning a Grammy in 1999 he received a Billboard Lifetime Achievement Award in 2009 and many years later became a Kennedy Center Honors Recipient.

In an entertainment industry, maintaining and sustaining a marriage is a huge task. But, Carlos made it seem like a piece of cake. Carlos had a dreamy love story with Deborah, married April 21, 1973, their marriage ended October 19, 2007, lasting for 34 years. With Carlos as a Musician and Deborah as a poet, philanthropist, and activist they were the perfect husband and wife. Carlos was a very loving husband and cared for Deborah a lot. They have three children together aged 17, 22 and 23.

Salvador, Santana’s son, is the eldest of his three children and is walking in his Father’s footsteps. Already having won a Grammy, he found his talent on the keyboard. Just as his Father had, Salvador had an early introduction to music. At the age of five, he found his passion and later composed the Grammy-winning track El Farol with his Father on the guitar.

FAQ: How old is Carlos Santana?

FAQ: What is Carlos Santana networth in 2020?