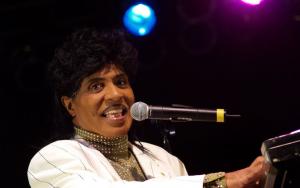 Little Richard was known as an American singer and musician. He was most famous for songs like ‘Long Tall Sally’ and ‘Tutti Frutti'. He created some of the world’s first and most influential rock ’n’ roll records.

Little Richard was born as Richard Wayne Penniman on December 5, 1932, in Macon, Georgia. He was the third son in a family of twelve children. Richard’s father made a living selling moonshine. He was brought up in a Christian family. His dad had issues with him and he was ordered out of the family home and Richard and his father’s relationship never got repaired. At the age of 19, Richard heard of his father’s death when he was shot outside a local bar.

After leaving home, Richard was welcomed by a white family the owned a club in Macon. It was there that he started performing, Richard spent the rest of his childhood days in church activities because his grandfather and two uncles were preachers. He got very involved in singing and eventually, he started learning how to play the piano.

During his rock ‘n’ roll music fame, Little Richard met Lee Angel, a female stripper, and supposedly fell in love with her. They were nearly planning to get married but the marriage did not take place and they became great friends instead.

Little Richard married Ernestine Campbell in 1959 and had a son named Danny Jones Penniman. Their marriage lasted only a few years and ended in 1963. Divorce did not take place but the couple got separated, after he was arrested in a homosexual raid, in 1963.

Richard got the stage name, Little Richard in the rock ‘n’ roll era of the 1950s. With his flamboyant screams, wails, and croons, Richard turned songs like ‘Long Tall Sally’ and ‘Tutti Frutti’ into great hits and influenced bands like the Beatles.

Besides singing and playing the piano, Little Richard appeared in films like ‘The Girl Can’t Help It (1957), ‘Don’t Knock the Rock (1956) and ‘Mister Rock ‘n’ Roll (1957). Even though he became famous in the rock music world, Richard felt more drawn towards the church and in 1957, he announced publicly that he quit from performing music. He became committed to ministry and started recording gospel songs. In 1959, his first religious album ‘God is Real’ was released.

In 1964, Little Richard once again entered the rock music world and by 1993, he became the recipient of the prestigious Pioneer Award of the Rhythm & Blues Foundation. The iconic star has been acclaimed with a number of rewards among them awards in his lengthy career. Richard was able to make it to the Rock and Roll Hall of Fame in 1986, The Rhythm and Blues Music Hall of Fame, Apollo Theatre Hall of Fame and, the NAACP Image Award Hall of Fame. In 2012, Little Richard’s song Tutti Frutti was declared the most inspired rock lyric by Rolling Stone Magazine.

Richard’s lifestyle was a mixture of cocaine and parties until one day he became ill and the doctor suspected that he had stomach cancer. Though it was not cancer, Richard felt that this lifestyle needed to change so he got involved with church activities.

In 2009, Richard underwent hip surgery, but he still does live shows occasionally. In 2012, he fell ill once again in Washington D.C., and suffered a bad heart attack. He attributed getting over the attack to Jesus’ presence in his life that brought him through.

On Saturday, May 9, 2020, he died at the age of 87. His son Danny Jones Penniman said that his father died of cancer but didn't disclose the location of the death.

FAQ: How old is Little Richard?

FAQ: What is Little Richard networth in 2020?