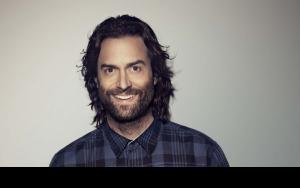 Chris D'Elia is an American stand-up comedian, writer, and podcast host who was born on March 29, 1980, in Montclair, New Jersey, in the United States. D'Elia was born to his father, a television producer, and director named Bill D'Elia, and his mother of Polish and Italian heritage. D'Elia grew up in Montclair, New Jersey until the age of 12 when his family moved to Los Angeles, California. He developed an interest in acting while attending high school at La Canada High School where he graduated in 1998. D'Elia went on to attend New York University but dropped out after only one year. He landed a role in a straight to video film and wrote several of his own scripts. By the time he was 25, D'Elia was beginning to see success as a stand-up comic. He went on to perform on Comedy Central's "Live at Gotham", "Comedy Central Presents", and "Live Nude Comedy" on Showtime. D'Elia landed his biggest role yet as Alex Miller on the NBC sitcom "Whitney" alongside comedian Whitney Cummings. D'Elia was married in 2006 to actress Emily Montague but the couple divorced four years later in 2010. D'Elia currently residents in Beachwood Canyon in Los Angeles, California.