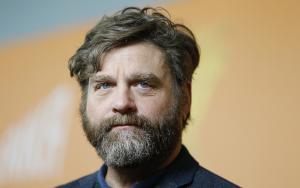 Zach Galifianakis is an American comedian, actor, and writer who was born on October 1, 1969, in Wilkesboro, North Carolina, in the United States. His birth name is Zachary Knight Galifianakis and he was raised by his mother Mary Frances and his father Harry Galifianakis. His grandparents were emigrants from Greece and his family was of the Greek Orthodox religion. Galifianakis grew up with a younger sister named Merritt and an older brother named Greg. He attended Wilkes Central High School before going on to North Carolina State University where he studied communication. Galifianakis dropped out of college to pursue his acting career and landed a guest-starring role in "Boston Common". He also joined "Saturday Night Live" as a writer for a brief period. Galifianakis went on to become a regular on Comedy Central appearing in both "Dog Bites Man" and "Comedy Central Presents". Galifianakis also landed several film roles including a starring role in the hit comedy film "The Hangover". He married Quinn Lunderberg in August of 2012 and one year later the couple had their first child, a boy. In 2016, Galifianakis and his wife had a second child, also a boy. The family currently lives on a farm in Sparta in Alleghany County, North Carolina.

FAQ: How old is Zach Galifianakis?