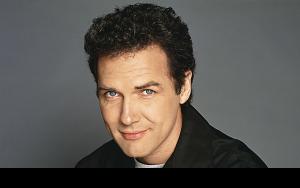 Norm Macdonald is a Canadian stand-up comedian, writer, and actor who was born on October 17, 1959, in Quebec City, Canada. Macdonald was born to his father Percy Macdonald and his mother Ferne Macdonald. He grew up with a younger brother named Leslie and an older brother named Neil Macdonald who went on to become a CBC News journalist. Macdonald attended Quebec High School and Gloucester High School in Ottawa, Canada. In 1993, Macdonald became a regular member of the NBC sitcom "Saturday Night Live" where he frequently performed impressions of public figures including Larry King and David Letterman. Macdonald also anchored for the segment titled "Weekend Update" where he regularly mocked people such as Hillary Clinton, O.J. Simpson, and Michael Jackson. Macdonald went on to release his own Comedy Central sketch album in 2005 titled "Back to Norm". The following year he released another sketch comedy album this one titled "ridiculous". Macdonald is also an avid poker player and in 2007, he came 20th place in the World Series of Poker. Macdonald married a therapist named Connie Vaillancourt in 1988 and the couple had a son named Dylan in 1993. Three years after the birth of their son, Macdonald and Vaillancourt divorced.

FAQ: How old is Norm Macdonald?

FAQ: What is Norm Macdonald networth in 2020?