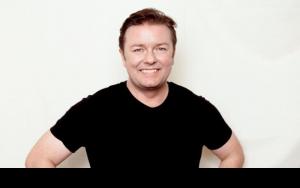 Ricky Dene Gervais is an English comedian , actor, and presenter perhaps best known for creating the comedic series The Office. Gervais was born in Reading on June 25, 1961. Gervais met long term collaborator Stephen Merchant while working for the alternative radio station Xfm at the University of London Union. The two teamed up with Karl Pilkington to do a Saturday night radio show and, starting in 2005, a series of free weekly podcasts. The podcast was consistently ranked the number one podcast in the world in January and February of 2006 and eventually led to a series of audiobooks. In addition to The Office, Gervais has been the creative force behind the television series , Extras, The Ricky Gervais Show, Life’s Too Short, An Idiot Abroad, Derek, and, most recently, the Netflix production After Life. The Office won the Golden Globe for Best Television series – Musical or Comedy and Gervais was awarded the Golden Globe for Best Actor – Television Series Musical or Comedy. Gervais also won a Primetime Emmy Award for Outstanding Lead Actor in a Comedy Series for his work in Extras. Gervais is well known for using social media to share his work with fans and to offer support to various Animal Rights groups. Ricky Gervais has been in a personal relationship with producer and author Jane Fallon since 1982.

FAQ: How old is Ricky Gervais?