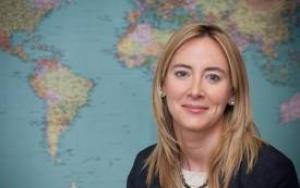 When Clare Duffy was in Vancouver during January of 2010, covering the Olympic Games, her mother was making her Broadway debut at the tender age of 81. This is not surprising to Clare because she came from a long line of performers, who acted on stage and on screen.

Clare Duffy is the daughter of Alice Duffy, the actress. Clare had two siblings, one of whom was a sister that succumbed to cancer in 2009.

Peter Boyle the great actor was Clare’s Uncle, on her mother’s side. Her mother was already making a name for herself when she decided to take time off from being an actress and raise three children. She returned to acting after her children were grown, and Clare states that the one thing her mother proved to her was that it is never too late to do what you want to do in life.

Clare graduating from college and with an education that would put her on the right tracks to start a career in journalism. She made good use of that education.

Clare Duffy is the NBC Nightly News Producer. As producer Clare shared in one of the eight headliner awards that were won by NBC. The second place award was given for a segment that aired on NBC Nightly News with Brian Williams in the Health and Science reporting category. The name of the segment was Early Warning and the correspondent that covered the story was Mike Taibbi.

When asked where she was on September the eleventh when the Twin Towers were hit Clare says simply “on the bus”. Clare says that on that morning she had been on the bus going back to her office after a meeting. She distinctly remembers that she was on Fifth Avenue on her way to NBC headquarters at Rockerfeller Center when a passenger announced that a plane had struck one of the Twin Towers. She remembers the shock and disbelief shared by her fellow passengers and she remembers seeing the smoke rising from lower Manhattan and knowing that something about her world had changed. She says that when she got off of the bus she did so at a dead run in a hurry to get to her office and start to work when one of the strangers on the bus shouted “you take care”. In New York it is rare to hear a stranger utter concern is encouragement and she stills carries the memory of those kind words with her today.

When security was breeched at the Newark International Airport in January of 2010 Clare Duffy was caught in the middle of the chaos in the airport. Clare had been to Vancouver to cover the Olympic Games and she says that at the time thousands of passengers were being forced to be screened a second time before they were allowed to board the plane. Many flights were grounded and when authorities were questioned none of them had an explanation of why they were being delayed.