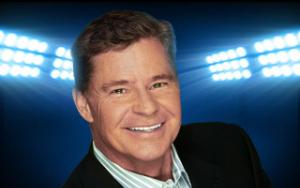 Dan Patrick is known as an American radio talk show host and television broadcaster. He is most famous for being a sports anchor at ESPN.

Daniel Patrick Pugh was born on May 15th, 1956, in Zanesville, Ohio. Patrick was raised in Mason, Ohio, which is about thirty minutes north of Cincinnati. John Ambrose Pugh and Patricia Joann were his parents. Patrick grew up with five siblings. Patrick’s father was an employee in the Department of Computer Sciences at the University of Dayton before he passed away in 1981 from cancer.

While working for CNN, Patrick married Susan White, a producer of Inside Politics by CNN. Together they have one son and three daughters.

Before beginning to work as an employee of ESPN, Patrick worked with WVUD, a rock station, as an on-the-air personality under the name Dan Pugh. In 1983, Patrick took a job with CNN as a sports broadcaster, where he worked until 1989. Some of Patrick’s assignments as a sports presenter for CNN included doing the broadcasting for the NBA finals as well as the World Series and the Winter Olympics. This job at CNN was followed by sports segments Patrick did on a daily basis for Bob and Brian, a Wisconsin early morning show, during the early 1990’s.

From 1989 till 2006, Patrick worked within ESPN as an anchor for SportsCenter. Patrick was also able to score his own show titled ‘The Dan Patrick Show’ which he hosted on ESPN Radio. The show lasted from September 1999 until August 2007. Patrick, alongside Keith Olbermann, eventually became very well known during the mid 1990s and was one of the most recognizable faces within ESPN sports.

Patrick was the brain behind ESPN’s new catch-phrase ‘This is Sports Centre’. The phrase was also utilized as the title for the show’s promotional campaign. Starting in March 2006, Patrick hosted pre-game shows for NBA Nation on ABC. Patrick’s job as a host for NBA Nation continued on through the NBA Finals for that year. Dan is also credited for initiating the trend within the world of sports news broadcasting of using the Spanish phrase ‘en fuego’ for players which meant ‘on fire’.

FAQ: How old is Dan Patrick?

Quick Facts
Help us Edit this article and get a chance to win a $50 Amazon Gift card.
Last Modified: Apr 24 2020
You may also like
articles you may like