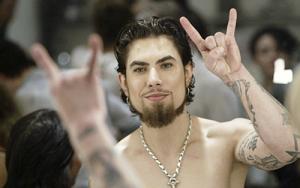 Dave Navarro is an American musician, presenter, and actor who is best known as being a former member of the alternative rock bands Jane’s Addiction and the Red Hot Chili Peppers. Dave Navarro was born on June 7, 1967, in Santa Monica, California, and is of Mexican descent. Dave started to play the guitar at the age of seven after hearing a Jimi Hendrix song at a local skate park. Dave Navarro’s trademark is the tattoos he has all over his body and he often performs shirtless. He is known for his wildly psychedelic guitar solos.

Dave’s mother was murdered by her boyfriend in 1983 and Dave created a documentary entitled Mourning Son which details his mother’s murder and his downward spiral into drug addiction. Dave became the lead guitarist for Jane’s Addiction in 1986 and the group released three successful albums until their breakup in 1991. Dave joined the Red Hot Chili Peppers in 1993 and remained with the highly successful band until 1998. Dave has been married three times; his first marriage with make-up artist Tania Goddard-Saylor lasted two years, his second marriage was annulled after just six days, and his third marriage with model and actress Carmen Electra lasted just over three years. Dave is currently said to be in a relationship with talk show host Andrea Tantaros.

FAQ: How old is Dave Navarro?