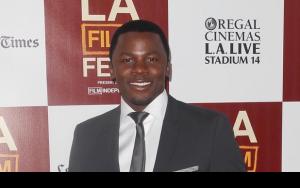 The American actor Derek Luke was born on 24th of April in the year 1984. The place of his birth was Jersey city, New Jersey and he was raised in the same town. Derek was a creative child since the very beginning and loved to listen music and act. His parents, both were from the creative field. Marjorie Dixon was his mother and a pianist, Derek grew up listening her play piano. Derek’s father Maurice Luke belonged to Georgetown located in Georgia and was into acting field and a major part of Derek’s inspiration to become an actor. For schooling he went to Linden High School and for higher studies to the Henry Snyder High School in the year 1993.

The extremely talented actor is active in the acting industry since the year 1999 and has given some off beat performances which has left the audiences awestruck. Derek’s first break was in an episode of the television show The King of Queens and he has not looked back since then. His most well accomplished work is for the feature film Antwone Fisher which was released in the year 2002. The film was directed by the very talented actor Denzel Washington. Denzel is one of actors whom Luke admires and follows since his childhood. The audition for the portrayal of character Antwone Fisher was carried out by Robi Reed-Humes, the casting director of the movie and after the audition Derek came out with flying colours. He was overwhelmed with the fact that he got a chance to meet his role model Denzel Washington after the success. Some movies with his presence to follow his movie debut were Biker Boys in the year 2003, Friday Night Lights in the year 2004, Glory road in the year 2006, Lions for Lambs in the year 2007 and a few more. Next came the 2008 film Miracle at St. Anna, directed by Spike Lee’s in which Luke played one of the four protagonist. In the 2009 film Notorious, Luck did a fabulous job while portraying the role of Sean Combs. He had a pivot role in the 2011 superhero flick Captain America: The First Avenger. The year 2012 saw him in two releases, ‘Seeking a Friend for the End of the World’ and ‘Sparkle.’ The last of his movie to be released was the 2015 flick Self/less. Talking about TV shows, Luke has featured in 20 episode of the 2009-10 series ‘Trauma’ and most lately in three episodes of the television drama ‘Empire’

Derek Luke happens to be married to Sophis Adella Luke. His wife Sophia is also into acting field and the couple is too much in love that too after 17 years of the wedding affair. The twitter account of Derek is always charged and active with updates for fans and followers. The actor’s net worth by the end on 2015 has mounted to a whooping sum of 5 million USD.

Derek has been an award winning performer, right from his debut. For Antwone Fisher he pleased all critics and was able to bag seven Best actor and Breakthrough performance awards.

FAQ: How old is Derek Luke?