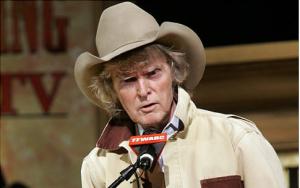 Past May we saw radio living legend and Cowboy Don Imus, one of the most controversial yet popular man we had been hearing on our radio for more than 4 decades , announced that his radio show will not see daylight again on the Fox Business Network starting May 29th, 2015. He announced the exist in a satirical manner. He said "Ordinarily when I leave these jobs, it's by police escort."

He was born during the time of war, and now, he is still fighting in the sheepie world where individual opinion and freedom of speech have lost meaning.

If you didn't know, Don climbed his part of ladders in the radio industry by being "a total callous schmunk", as put by Cavuto, his longtime partner from the network, in the last show.

A radio personality known for his satire kind of insult led humor and affront, Don Imus sharp tongue has not only brought him success, but also various controversies and lawsuits. Those who have listened to him know that he is more of a liberal than conservative. However, he is generally perceived to be like Republican and Democratic  politicians because of his sharp tongue.

His show is popular because he is able to, in simple words, drag people (no mater of their class, race, gender or power status) into interesting situations by asking insulting question in an honest way. We don't know how he manages to do that or what does that mean. Phew!!

As of 2015, he is 75. At such point of life, he likes spending as much as time with his family and not only that, doing great-cause work to help children with cancer and other groups.

Now moving on to his physical configuration, he is a tall man with the height of 6 feet and 2 inches. An American national of white ethnicity, Don has a messy shoulder length hairstyle (white and gray color). Since he is an old man, he has a wrinkly face. However, when he was a young man, he was quite a dashing man.

Talking about hair, his show "Inus in the morning" was actually suspended by MSNBC in 2007 because he had made controversial comment demeaning Rutgers women basketball team because of their tattoos and hair. However, the team only consisted of eight percent African Americans.

However, he later apologized by issuing a statement. However, he initially dismissed the sad incident emphasizing nappy headed ho is a term originated and highly used in the black community.

Talking about his relationship status, he has been married twice till now. His current wife is Deirdre Imus (m.1994 - present), the founder and president of the Dierdre Imus Environment Health Center. Previously, he was married to Harriet Showalter (m. 1969 – 1979). Alltogether, he has three children biologically, two daughters (three grand children) from his first marriage, and a 1998 born son from his current wife. Nevertheless, he also has two adopted stepdaughter from his first marriage.

Born on July 23, 1940, in Riverside, California, US, Don Imus is basically known as the original shockjock of one of the most popular radio program in the American History "Imus in the Morning".

Although he is a controversial person, he is also a source of inspiration for millions. He successfully battled alcoholism and drug addiction in the past. He also faced his parents' divorce in his adolescence. He tried to peruse music career as a rock and roll musician at the age of 19 after dropping high school as a homeless soul. In his 20's, he took various jobs such as brakeman (because he lacked education and skills) until he started his entertainment career as a disc jockey.

Interesting wiki, he joined Marine Corps as a bugler at the age of 17 because of his mother strategy to keep him out of jail. He was already arrested because of a school yard fight. Interestingly, he was also elected as a class president in secondary school, but later impeached.

Official Twitter feed of Indianapolis Motor Speedway! Your source for news and information on the #GPofINDY, #Indy500and #Brickyard400.

More details on his professional life (including controversy, awrds and work credentials) can be accessed via his Wikipedia biography.