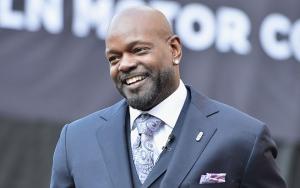 Emmitt Smith, a Pro-Football Hall of Famer, is regarded as one of NFL's greatest running backs. In 15 seasons (1993-2004), the no 22 rushed for 18,355 yards and scored 175 touchdowns. Nevertheless, he is often credited for leading Dallas Cowboys to three Super Bowl Championships.

If you didn't know, he is currently the NFL all-time leading rusher. Nevertheless, he is the only player who has achieved a Super Bowl Championship, Super Bowl MVP, NFL MVP and NFL Rushing Crown in the same season (1993). Also, it will be worth mentioning that his name comes in the list of few players ( only four running backs) who lead NFL in rushing category for three of more consecutive seasons, and also in the list of rare players ( only two players in the list including Jerry rice) who scored more than 1000 career points being  non-knickers.

Interestingly, he was known as one of the Dallas Cowboy's triple threats in the 1990's, which included quarterback Troy Aikman, receiver Michael Irvin.

Now moving on to his physical configuration, he is a tall man with the height of 5 feet and 9 inches. The man who is known for his goatee beard has an amazing athletic body and no hair. However, judging by his recent pictures, we have arrived to the conclusion that the American national of black ethnicity ( also can be called mixed as it is said his grandmother had white blood- blogs.ancestry.com) has maintained his fit body even at the age of 46 and busy schedule.

Talking about his relationship status, the public relation graduate (1996) from University of Florida is married to Patrica Southhall, Miss Virginia 1994 1st runner up (Miss Photogenic & Best in Swimsuit), since April 22, 2000. Prior to Patrica, a long time ago, he was dating his then girlfriend Hope Wilson. Altogether, Smith has 4 children; a daughter (Rheagen Smith) with ex-girlfriend Hope Smith, a son (Emmitt IV) and a daughter (Skylar) with his wife Patrica, and a stept-daughter Jasmin Page Lawrence from Patrica's previous marriage.

Born on May 15, 1969, in Pensacola, Florida, Emitt Smmith is widely known as a man of imagination.

According to Emmitt, he used to imagine being the all time rusher even before joining NFL professionally. Understanding the power of imagination and hard work, Emmitt has achieved a phenomenal post Football career as well.

As of 2015, we know him as a successful entrepreneur, valuable brand person in the sports industry, best-selling author, philanthropist, motivational speaker and what not.

Wow, 1.2 million US dollars in charity was raised over the 2015 Emmitt Smith Celebrity Golf Invitational 2015 by PAT and EMMITT SMITH CHARITIES just recently.

And, believe it or not, Emmitt is 2006 Dancing with the Stars winner.

Ending on a high note, Emmitt is someone who is a source of inspiration for millions. He was never known as a fast, powerful or blindingly deceptive running back, but still he couldn't be stopped. Simply, he was one of the balanced players you will ever have. Plus, he was always 5-10 pound short of the average weight for his position. So when you feel like you haven't the most magnetic capabilities, just remember Emmitt Smith and try to understand that life is about transforming your capabilities to strength and not about being sad for capabilities you don't have. Emmitt says you can achieve anything with power of imagination and hard work. So start imagining.

No wonder his net worth is speculated to be in the range of 20 million US dollars. Unfortunately, Emmitt is suffering from the "disease of kings” as we know it as gout.

Keep connected to our site to get more wiki on him. Don't forget to visit his official site www.emmittsmith.com if you want to get more insight on his professional life including his companies, charity work and football career.

FAQ: How old is Emmitt Smith?