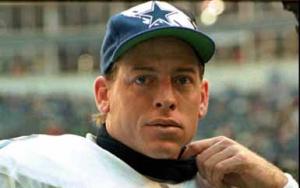 Troy Airkman is often credited for taking his team Dallas Cowboys from bottoms to top of the football league.  One of the longest serving players for the Dallas Cowboy (played 12 consecutive seasons for the team), Troy Aikman was a renowned UCLA quarterback, arguably the best, whom Dallas Cowboy drafted as the overall No 1 Pick in the 1989 NFL draft. Troy Aikman was picked by Dallas in the process of executing it’s strategy to revive its 1970's legacy, as the team performance in 1980's was getting worse and the "Saving and loan Crisis (1986-1989)" wasn't helping at all.

The whole saga ended with FSLIC stream-rolling then owner M.R. Bright to sell the team to oil and gas businessman Jerry Jones.

Shortening the story, Troy, who got named as Super Bowl Most Valuable Player in 1993, was one of the most successful players for the team in 1990's. Even when the team lacked offensively in other areas or defensively, he helped the team to retain its prestige and glory.

One can check his career stats on NFL.com. Again, making the story short, Troy bragged three Super Bowl (1992), (1993), (1995), 6 Pro-Ball and 3 NFC in his 12 years career with Dallas. Nevertheless, Troy was Dallas all-time leading passer with 32,942 yards until 2014. He was surpassed by Tony Ramo after Tony's 218 yards performance against Colts which placed him at 32971 yards (now 33821 yards). Still, Aikman is all time leader in terms of Pass completion, Pass attempts, Interceptions thrown and Longest Completed Pass Thrown. Nevertheless, Troy is currently third on the list of most win by any quarterback in any decade (was first during his career).

In more details, he has dignified record of playing 12 consecutive year ( until a tackle led injury ended his career, suffered series of injuries and 10 concussions in his career) with 2898 pass completion, 4715 pass attempts and 32942 passing Yds from 1989 to 2000.

Now moving on to his physical configuration, Troy Airkman, who was once named Texas Monthly's the most eligible bachelor in Dallas, is a towering man with the height of 6 feet and 4 inches. Nevertheless, the handsome man with blonde-hair and white ethnicity has an amazingly build muscular athletic body (see his hot shirtless pictures online).

Anyway, his net worth is speculated to be around 25 million US dollars. As of 2015, we know him as a television sportscaster for Fox ( joined in 2001, current salary- 1 million – 1.5 million US dollars), radio host ( hosts weekly sports radio show on Sporting News radio, radio correspondent ( Dunham and Miller morning show's correspondent), brand person ( was public spokesman of Acme Vrick for many years), philanthropist ( chairman of the Troy Airkman foundation, a children focused charity organization), businessman ( co-founder of NASCAR Sprint Cup Series Racing Team Hall of Fame Racing, part owner of the San Diego Padres and also invests in real-state).

It’s no wonder he is worth this high. He became the highest earning player in 1993 when he accepted Dallas 1993 contract of 50 million US dollar for 8 years including 11 million signing bonus.

Talking about his relationship status, he is currently dating is long-time girlfriend Tracy Ripsin, a model. In the past, many popular personas such as Skip Bayles, Dexter Manly and Denver Broncas  have tried to raise question about Troy's sexuality. Once, then Redskins player Dexter even labeled Troy a queer while speaking on a radio show. However, Dexter was just angry because Troy predicted Dexter's team will lose.

Anyway, as far as we know, he is not a gay. In an interview in the past, he commented on Skip Bayles allegations saying dating men is a life style choice and he is not interested in doing such act.

Previously, he was married to Rhonda Worthey, with whom he has two daughters.  The couple ended their 10 years of marriage in 2011. It is said that Troy paid Rhona 1.5 million US dollars as divorce settlement.  Post divorce. Rhonda has once been arrested for being drunk in public.

Of course, to be a successful quarterback, a player should possess tangible skills (physical skills such as arm strength, mobility, and quick throwing motion) and intangible skills (competitiveness, leadership, intelligence, and downfield vision). Troy was filled with most of the above mentioned qualities. In addition to such qualities, team work and should win mentality proved to be his best friends.

However, many sports critics argue that his name should not be in the list of Pro-Football Hall of Famers because of his overall Pro-Football ranking being remarkable low. However, people who have watched his career closely say that he turned successful because he was a lucky man, at the same time being a good player and team-worker.

Born on November 1, 1921 in California, Troy was a sports guys since his childhood. Young Troy early days interests were baseball ( rejected new York Mets contract after high school), football, hunting and fishing. His source of inspiration in his life is his parents.

Keep connected to our site to get more wiki on the famous and illustrative sportscaster in coming future.

FAQ: How old is Troy Aikman?