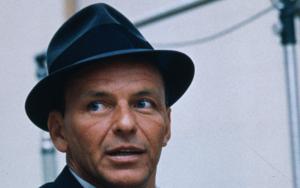 Frank Sinatra was born Francis Albert Sinatra on December 15, in Hoboken, New Jersey. Sinatra is often hailed as the most influential and popular American singer of the 20th century. Frank’s parents were Italian immigrants who lived in an upstairs tenement at 415 Monroe Street in Hoboken. Frank’s father was a tavern owner, a part-time prizefighter, and a firefighter; but it was Frank’s mother, Dolly, that is credited for developing the self confidence that carried him so far in life. Dolly was a determined woman; driven and energetic, who provided Frank the catalyst he needed to achieve greatness. Frank’s daughter spoke to the importance of his mother in Frank’s upbringing and said of their relationship: “They’d fought through his childhood and continued to do so until her dying day. But I believe that to counter her steel will he’d developed his own. To prove her wrong when she belittled his choice of career…Their friction first had shaped him; that, I think, had remained to the end and a litmus test of the grit in his bones. It helped keep him at the top of his game.”

Frank’s interest in music developed early and he spent his time listening to Gene Austin, Rudy Vallée, Russ Colombo, and, especially, Bing Crosby. Sinatra was inspired by the recordings of Bing Crosby and credits him for his choice to take up popular singing as a vocation. Frank attended David E. Rue Jr. High School and A.J. Demarest High School but left without graduating having been expelled after just forty seven days for “general rowdiness.”

Although Frank began singing professionally as a teenager he never learned to read music, instead, learning it by ear. Frank would perform in local Hoboken social clubs or for free on local radio stations such as WAAT in Jersey City. Sometimes Frank would go to New York where he would sing, literally, for his supper or even cigarettes.

In 1935, Frank won a talent contest with a band he had joined that was known as the Hoboken Four. Before Frank joined they were called the 3 Flashes and purportedly only let him join the group because he had a car and could chauffeur them around. For winning the talent contest Frank, and the rest of the Hoboken Four, earned a six month contract to perform on stage and radio across the United States.

In 1938, Frank found employment as a singing waiter at The Rustic Cabin, a roadhouse that was connected with WNEW radio station in New York. Frank felt that this was the break he was looking for even boasting to friends that he was going to “become so big that no one could ever touch him”. In March of 1939 Frank recorded his first solo studio recording entitled “Our Love”. Later that same year, bandleader Harry James signed Frank to a two year contract. This contract resulted in ten commercial recordings that featured the young singer. Frank’s warm baritone was well showcased on such songs as “From the Bottom of My Heart,” “My Buddy,” and “Ciribiribin.” Frank released his first commercial record with the Harry James band in July of 1939 but it suffered from weak sales on its initial release. Sinatra became frustrated with the status of The Harry James band and asked to be released from his contract which was done amicably.

FAQ: How old is Frank Sinatra?

FAQ: What is Frank Sinatra networth in 2020?