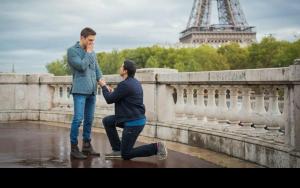 Gio Benitez is a bilingual American television broadcast journalist that works for ABC News and who appears on Good Morning America, World News Tonight, and 20/20. Gio Benitez was born on October 29, 1985, in Miami, Florida. Benitez’s parents are Cuban and Benitez is a class of 2004 graduate of Miami Coral Park High School in Miami-Dade County Florida. Benitez went on to attend Florida International University, in Greater Miami where he graduated with a Bachelor of Arts in anthropology and sociology. Gio Benitez is known for hosting the Fusion TV version on Nightline.

Fusion TV is a television cable and satellite news satire channel owned by Fusion Media Group. Gio Benitez married Tommy DiDario on April 16, 2016. Tommy DiDario is an on-air lifestyle expert who covers fashion, grooming, health, fitness, travel and more for television shows including The Rachael Ray Show. He is the son of Karen A. DiDario of Berkeley Heights, New Jersey, and Thomas G. DiDario of Basking Ridge, New Jersey. His sister, Megs A. DiDario became a Universal Life Minister so that she could officiate the event, which was held at a historic English-style cottage in Homestead, Florida. The couple was introduced through Instagram in January of 2015.

FAQ: How old is Gio Benitez?

Quick Facts
Help us Edit this article and get a chance to win a $50 Amazon Gift card.
Last Modified: Apr 15 2020
You may also like
articles you may like