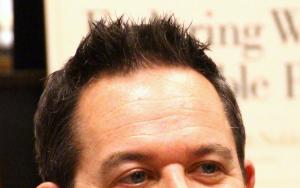 Greg Gutfeld is known as an American television personality, author, and blogger. He is most famous for being a panelist on The Five.

Gregory John Gutfeld was born on September 12, 1964 in San Mateo, California. His parents were Alfred Jack Gutfeld and Jacqueline Bernice. When he was a teenager, he completed his high school studies at Junipero Serra High school. After finishing high school, he went on to college. In 1987, he graduated from the University of California Berkeley with a bachelor’s degree in English. Greg claimed that attending UC Berkeley had a very huge impact on changing his political thinking and gave him a whole new and wider perspective on different political matters.

In 2003, Greg got married to his wife, Elena Moussa. Their first meeting happened in London. He met Elena when he was working for a UK based magazine. Shortly after their meeting, they got into a relationship.

Greg started his career as an intern at The American Spectator. After that, he was a writer for a magazine called Prevention. Later he worked as an editor for many different magazines. He was also a writer at Men's Health in 1995. He also worked for Maxim Magazine for two years.

From the beginning of his career, he had a passion for writing and he had also authored a number of books. Greg’s first book was published in 1997, the title of the book was The Scorecard. All of his books were published by different publishing houses. The names of his other books were The Bible of Unspeakable Truths, The Joy of Hate, Not cool: The Hipster Elite and Their War on You, Hot to be Right, Lessons from the Land of Pork Scratchings, and The Scorecard at Work.

Greg increased his fame when he began hosting a famous TV show called The Five. The talk show became a big hit in the United States because of its strategy to discuss the news in a debate format. The hosts discuss various topics that are newsworthy in America and also abroad. There are five hosts of the show and Gutfeld is one of them. The other hosts of the show are also very talented and well-known media personalities. Together, the five people made the show one of the most popular shows on Fox.

He is also an online blogger. He usually blogs on his own website The Daily Gut but he sometimes also blogs on BigHollywood where he writes in a conservative, yet libertarian and funny manner about the daily news. Greg has made appearances in many television shows such as The O'Reilly Factor, where he appeared regularly. He also made some stops such as Dennis Miller’s radio show as well as spots on Opie and Anthony. In addition to this, he makes a lot of contributions to Breitbart.com

Greg got his own show called The Greg Gutfeld Show where he parodied current events and talked about them with a comedic twist. In addition to the humor on the show, he also interviewed famous media personalities and critics.

Greg was involved in a number of controversies. The most infamous controversy was he mocked an officer of the Canadian military. He apologized for his behavior on a news channel. A minister from Canada demanded an apology on national news channel for hurting the image of their military officer. After that incident, he also fell prey to a mosque controversy. Apart from all the negative controversies, he is considered to be a humorous media personality.

FAQ: How old is Greg Gutfeld?