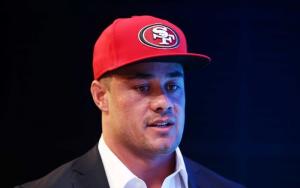 Jarryd Lee Hayne is a professional American football player currently at the age of 27. He was born on the 15th of February in 1988. His home town is Sydney, New South Wales, in the country of Australia. He is known for his incredible capabilities as well as his significant body features. He’s got an impressive height of 6 ft 2 inches and he weighs around 220 pounds.

Hayne showed his affection towards the sport at a very early age. He was only six years old when he started playing junior rugby in the team of Campbelltown City, East Campbelltown. However, he had his first appearance in the NRL with the team of Parramatta Eels when he was 18 years old. The date was the 19th of May, 2006. The opposing team was the Penrith Panthers and the match was held on the CUA Stadium. He quickly made a great impression of himself by scoring 17 tries in only 16 games during his first season.

His rugby career really took off and some of the national newspapers started describing him as the best player of Parramatta since Brett Kenny. Jarryd managed to win six “Man of the Match” awards, which definitely is impressive. He’s also got a lot of other awards during his rugby career such as the Player of the Year as well as the Fullback of the Year, becoming one of the youngest athletes to accomplish this.

Jarryd got into the NFL on the 3rd of March in 2015 when he signed a three-year contract with the San Francisco 49ers. This deal is to net him a total of $1.575 million over the course of the contract. He also has a guaranteed amount of $115,000 provided he doesn’t make it in the 53-man roster. However, on the 5th of September in 2015 he managed to make it in the final roster which got him to make a proper transition to this relatively new sport for him

Unfortunately on the 31st of October, 2015, Hayne was waived by the team. Regardless, on the 2nd of November, 2015, Jarryd announced through his Twitter that he has signed a new deal with the practice squad of the team. Later on the management confirmed his demotion.

Jarryd Hayne’s net worth is estimated to be around $1.1 million. Of course, he also gets paid by sponsors as well as for different advertisements, endorsements and bonuses. Throughout his rugby career, Jarryd managed to accomplish significant results. He became the Dally M Rookie and Winger of the Year, New South Wales Player of the year. He also managed to lead the National team of Australia to victory in the 2013 Rugby League World Cup as well as in the 2009 Rugby League Four Nations Championship. However, he seems to be unable to make a swift adaptation to the NFL. He muffed one of his first attempts at a punt reception while being on national U.S. television which later on led to his demotion from the team. In any case, considering his young age, Jarryd surely has a stellar career in front of him.

FAQ: How old is Jarryd Hayne?