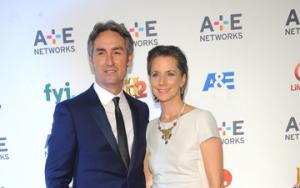 Jodi Faeth is known as the wife and collaborator of Mike Wolfe. Her husband, Mike is the creator and star of a reality TV program called American Pickers.

Jodi and her husband Mike dated for many years before they decided to get married on September 8, 2012. After their marriage ceremony was over, they flew off to Hawaii for their honeymoon. During their relationship, Mike tried to avoid talking about his picking hobby because he didn’t feel it was an attractive practice to women. It was something he did on his own time and not something that he felt Jodi would be interested in. He couldn’t resist his passion though, Jodi was able to spot how addicted he was to picking, “When I met him, he used to disguise picks as dates. He’d say, ‘We’re going to Wisconsin to a bed-and-breakfast. We were really going to Wisconsin to meet Speedo Joe”

Mike was a smart man to disguise his pickings as dates with Jodi. Not only did he get to travel and spend time with his girl but he also got to indulge in his hobby. She didn’t mind though, she supported his career and enjoyed the places that he was taking her to. She loved Mike for being himself and didn’t care what he did to make him happy.

Her husband, Mike earns a living by being a well-known and respected forager. For over twenty years, he has crossed 200 American cities, looking for vintage and antique items to sell in the shop he owns at Le Claire Iowa called Antique Archaeology.

His breakthrough came when the History Channel started to air his everyday activities in the shop. His series started in 2010 and it attracted over 3.7 million viewers for the premiere episode. The American Pickers show is now one of the highest-rated series on the History Channel. Mike gets paid 500,000 dollars for each season. Jodi loves Mike because he is a person who is interesting and likes to travel around looking for rustic gold.