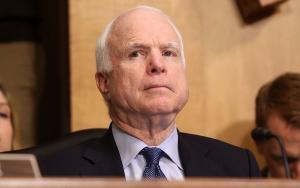 John McCain was born on August 29, 1936. His full name is John Sidney McCain III. McCain is a politician in the United States serving as the senior Senator from Arizona from 1987 until the present. He ran for President of the United States as a Republican candidate in the 2008 election, which he lost to Barack Obama.

John McCain was trained at the U.S. Naval Academy, graduating in 1958. He entered the United States Navy,  following the footsteps of his father and grandfather, who were both four-star admirals in the US Navy. John McCain was a naval aviator, flying ground-attack planes from aircraft carriers. John McCain served in the Vietnam War, during which he narrowly survived the 1967 USS Forrestal fire. During a bombing mission over Hanoi in October of 1967, McCain’s aircraft was shot down. McCain sustained grave injuries, and was captured by North Vietnamese forces. He was held as a prisoner of war from 1967 to 1973.  During this time, McCain experienced episodes of torture. He was offered out-of-sequence repatriation by his captors but refused. The injuries that he sustained during the Vietnam war have left him with long-term physical disabilities. John McCain retired from the Navy as a captain in 1981 and moved to Arizona.

John McCain, as a member of the Republican party, is generally known as a conservative Republican and he has been seen as guided by conservative principles in general. However, McCain has on many occasions gained a media reputation as a "maverick" for his readiness to disagree with the Republican party on selected issues. McCain was investigated and for the most part exonerated in a scandal of the 1980s involving political influence as a member of the Keating Five. Following this, he made campaign finance reform one of his key issues of concern. This eventually resulted in passage of the McCain–Feingold Act in 2002, focusing on campaign finance reform. John McCain is also known for his work in the 1990s to re-establish diplomatic relations with Vietnam. McCain is also known for his argument that the Iraq War should have been fought to a successful conclusion. John McCain has chaired the Senate Commerce Committee, where he made clear his opposition to pork barrel spending. John McCain was a member of the bi-partisan group known as the Gang of 14, playing a crucial role in dealing with a crisis over judicial nominations.

FAQ: How old is John McCain?