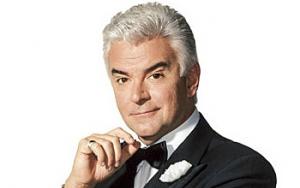 John George O'Hurley is an American voice actor, actor, TV personality, and also author. He is known for his role in the sitcom, Seinfield. He also hosted a game show, Family Feud.

O'Hurley was born in Kittery, Maine, to homemaker Jean and ear, nose, and throat surgeon John O'Hurley. O'Hurley graduated from Providence College in 1976 with a BA in Theatre after attending Natick High School in Natick, Massachusetts, and Kingswood-Oxford School in West Hartford, Connecticut. Carol, his older sister, died of epileptic episodes when she was 17 years old in 1970, O'Hurley volunteers for the Epilepsy Foundation. Bruce and Neal, his younger twin brothers, are his siblings. Susan, his younger sister, is his other sibling.

From 1995 through 1998, O'Hurley portrayed J. Peterman, a fictitious version of catalog-company tycoon John Peterman, on Seinfeld. Since 1999, O'Hurley has been a part-owner and member of the board of directors of The J. Peterman Company, which he helped revive.

During the summer of 2005, he was a contestant on the inaugural season of the television show Dancing with the Stars. O'Hurley and his dance partner Charlotte Jørgensen advanced to the finals, where ABC soap opera actress Kelly Monaco defeated him.

The network stated that O'Hurley, Monaco, and their professional dancing partners would square off in a particular "grudge match" episode on September 20, 2005, after supporters claimed Monaco's triumph was a set-up. Unlike the first episode, the outcome was chosen purely by audience votes, rather than a combination of the three professional judges and the viewer votes.

The winning teams were O'Hurley and Jorgensen. The rematch raised $126,000 for the charity Golfers Against Cancer. "Learn to Dance with John and Charlotte" was created as a dance tutorial video.

Though Eva and John denied this rumor that she was with Callahan even when she was married, Eva said she met her boyfriend only when her relationship with John was almost over. However, most sources confirm that Eva cheated on John with Callahan, and Callahan cheated on her with a woman with four kids.

John never commented about his life, separation, and other details about Eva. Eva also never talked about John in an interview. However, John talked about Lisa and said that she gives a lot of importance to his career and thinks that he is a rock star. He said that it used to bring him a lot of joy. He said that his relationship would be smooth and elegant even after they both grew old. He said that being a star in a show is adding spice to his marriage.

He talked about how exciting she was she conceived, how they have picked names, and how he considered life perfect with a child. The amount of enthusiasm he shows in this relationship confirmed that this relationship would last for long.

It was said that their wedding was a private ceremony with limited guests. He did not want to attract a lot of attention to his wedding. Lisa never talked about her wedding either. They announced that they got married, which was all that the public ought to know about them. Many personalities tend to keep their data to themselves. They would provide only essential information like the wedding, childbirth, and separation. No additional data or comments to the rumors would be provided. This type of lifestyle is proven to reduce the stories to a large extent.

FAQ: How old is John O'Hurley?