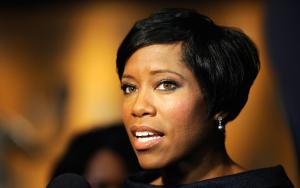 Regina King was born on January 15, 1971 in Cincinnati, Ohio. Regina is a famous African American actress that is most known for her role in the sitcom 227 in her younger days and also as the voice of two young brothers in the popular and controversial cartoon, The Boondocks.

She is a very popular actress and has achieved a lot of success in her career. Regina’s most recent roles have been on popular shows like HBO’s The Leftovers, 24, and Southland. She also had an appearance on the classic Tom Cruise movie about a sports agent, Jerry Maguire.

Some of her most hardcore fans most remember her as the sister of Ice Cube in the cult comedy classic, Friday. In the movie, Ice Cube just got fired from his job and gets a visit from his best friend Smokey who is determined to hang out with Ice Cube and smoke weed with him all day to celebrate his unemployment. Throughout the movie, Regina and Ice Cube have a combative sibling rivalry. She even tries to annoy Ice Cube’s friend Smokey, going as far as setting him up on a blind date with an obese and bald woman.

Regina dated Ian Alexander for several years and both of them were very much in love. She did not want to get married as she was at the peak of her career at that time. However, he wanted to settle and start a marital life with her even though she felt it wasn’t the right time. She finally gave in when they decided to marry in 1997.

It was a grand wedding and many people were invited to their marriage reception. She looked stunning in her wedding dress and Alexander was also looking very handsome in his wedding suit. She also carried on with her career after her marriage. There was a very good understanding between them on how they were going to maintain and balance their work with their married life.

They had a son together and named him Ian Alexander Jr. As time passed, she got busy with her career and he had to manage the home and take care of their son alone. He got frustrated with his lifestyle and this lead to an argument between them. This huge problem in their relationship led to their split. She got separated from Ian Alexander in the 2007, ten years after getting married.

Regina started dating another actor, Malcolm Jamal Warner in 2011. Malcom was very famous for portrayal of the eldest son the The Cosby Show.  They dated each other for two years until Malcom decided to end the relationship. He claimed that he was not feeling the spark with her anymore and he asked her and her son to move out of his house. Her career came to a halt because of the shocking news. Not only did he break up with her, he broke up with her on Valentine’s Day. There was a lot of talk about the breakup in the media, which affected her career.

FAQ: How old is Regina King?