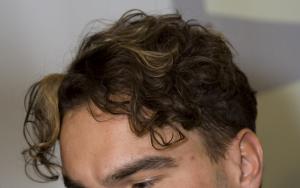 Johnny Galecki plays the character of Leonard Hofstadter on the Big Bang Theory. This television series has made Johnny Galecki recognizable to the majority of the people in the United States, and to people in other countries as well.

Johnny was born in Bree, Belgium on April 30, 1975. His parents were American’s who were stationed in Belgium because his father Richard was in the United States Air Force. His mother Mary Noon worked as a mortgage consultant. Between the two parents there was a mixture of Polish blood, Irish blood, and Italian blood. His full name is John Mark Galecki.

He is the oldest of three children. He has a brother named Nick and a sister named Allison. Johnny says his brother is a genius when it comes to mechanical things.

His acting career began in 1987 on a miniseries made for CBS. He played in the series with JoBeth Williams and John Goodman. He would work with Goodman again when he played David Healy on the sitcom Roseanne.

Galecki has been cast in several big screen productions like the 1997 thriller “I Know What You Did Last Summer”. In 1997 he had a role in Suicide Kings and a supporting role in Vanilla Sky in 2001.

His role as Leonard Hofstadter began on Sept 24, 2007 when the network debut of their new sitcom. Originally Johnny was cast to play the role of Sheldon, but the producers quickly recognized that he was better suited for the part of Leonard. Johnny brings some of his real life talents into the show like his talent for playing the cello.

Kaley Cuoco and Johnny Galecki met on the set of the Big Bang Theory. Kaley plays the part of the Cheesecake Factory waitress that lives across the hall from Leonard and Sheldon. On the television series Kaley’s character has been the love interest of Johnny’s character most of the time. There were occasions when Leonard and Penny would break up and see other people, but generally the two were either a couple, or one of them was pining because they were not a couple.

Little did people know the couple who played as romantic interests on the show was romantically linked in real life? Kaley and Johnny were romantically involved away from the set. They remained a couple off of the set for two years, and no one knew this until they separated. They have still remained professional on the set of the show and display no animosity towards each other.

Johnny owns 350 acres of land with a log cabin on them. The land is located in San Margarita, California. There are vineyards on the property along with his home.

Johnny is a vegetarian.

He was nominated for a Primetime Emmy in 2011 and a Golden Globe award also in 2011. He was nominated in 2012 and 2013 for the Screen Actors Guild Award for Outstanding Performance, but he won none of those awards.

FAQ: How old is Johnny Galecki?

FAQ: What is Johnny Galecki networth in 2020?