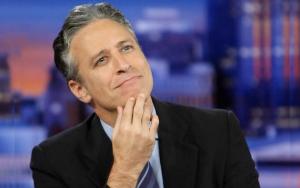 Jon Stewart is an American comedian, writer, producer, and political commentator known for his hosting of The Daily Show on Comedy Central from 1999 to 2015. Jon Stewart was born Jonathan Stuart Leibowitz on November 28, 1962 in New York City. Stewart graduated from the College of William & Mary in Virginian where he majored in psychology. After college, Stewart held a wide variety of jobs including puppeteer, caterer, contingency planner, contract administrator, shelf stocker, soccer coach, and bartender. Jon Stewart made his comedic debut at The Bitter End in New York and became a regular at the Comedy Cellar, where he was the last performer of the night for two years.

Stewart’s career started to take off after a 1993 appearance on NBC’s Late Night with David Letterman. Also, in 1993, Stewart developed a talk show for MTV called The Jon Stewart Show, which became the second highest rated MTV show (behind Beavis and Butthead). In 1999, Stewart began hosting The Daily Show on Comedy Central. Stewart has won a total of twenty Primetime Emmy Awards for the show. Jon Stewart dated Tracie Lynn McShane for four years before proposing to her through a personalized crossword puzzle. The couple was married in 2000 and has two children. Stewart and McShane bought a twelve acre farm in Middleton, New Jersey called Bufflehead Farm in 2013 that they use as an animal sanctuary.

FAQ: How old is Jon Stewart?