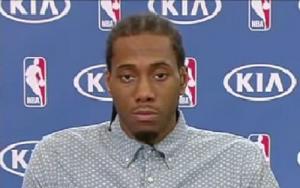 Kawhi Leonard's middle name is Anthony. Kawhi Leonard is a prestigious American professional player. He has been playing basketball for a while now and the credit for his basketball skills is to be given to his father Mark Leonard, who owned a car washing yard. Kawhi Anthony Leonard was born on 29th of June in 1991 in Los Angeles, CA. The player has earned a reputation of being a self-built man. His this journey is often referred to as from tragedy to stardom. The star is about to turn 25 this year and has made achievements to last for another century in minds and hearts of others.

But the sad part here is, to be a part of the heart of millions Kawhi had his' broken first which probably lead him to his achievements. So the word that has travelled around is that he started playing basketball at a young age. So in summers while he lived in Compton,  he used to be at his father's car wash, scrubbing the cars in the sun for hours. For our star at that time washing cars equated to vacations. But to his misfortune on 18th January in 2008, his life took a whole new turn. The 16 years old Kawhi received a phone call informing him that his father was murdered at his workplace after a confrontation the same day. Kawhi not only lost his father as such young age but lost his role model and probably the biggest fan and above all a Best friend.

But as we know it this tragedy fuelled him in a way nothing ever did. He is known to have directed all his anger, frustration towards basketball. Extended hours in the gym, nonstop shooting practices, weight lifting and what not. His hard work gave him an almost perfect body frame. He is 2.01m (6'7") tall and his weight is 230 lbs which are considered pretty fit. He completed his schooling at Canyon Springs High School where he and his friend Tony Snell played an outstanding game and won California Mr. Basketball. His talent with basketball stood out at college as well. On social networking sites like Twitter people have exclaimed for the basketball to be his girlfriend  - the love of his life.

As he turned 20, life again took a big turn but this time, his hard work had done it. He was selected by the Indiana Pacers in the first round itself of the 2011 draft and was transferred to San Antonio immediately. Kawhi was labelled  to the Second Team All-America and after he was done with his final two seasons at San Diego State he was to join the 2011 NBA draft. After joining the NBA draft, there's no requirement to say what he has achieved and the ways he has been a blessing to the team and how he has been the reason behind the victories. His hands on the basketball have given a new definition to a good game and the stats say that, his 4 years in the team have turned the tables upside down, everyone is curious what he has got in the box for us this year and he himself said there are many aspects of his that he hasn't gotten to show yet. He claims he is prepared and ready and is going on with a hope that best is yet to come for him.

FAQ: How old is Kawhi Leonard?

FAQ: What is Kawhi Leonard networth in 2020?