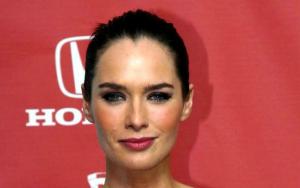 Lena Headey is an English Actress, who was born on 3rd October, 1973. She was born in Hamilton and has spent her childhood in Huddersfield and Bermuda. She had a passion for acting and used to participate in plays in her middle school. A casting agent ‘found’ her while she was performing a one-off show when she was just 17 years old. He took her photograph and asked her to come for an audition. She landed a supporting role in the drama ‘Water Land’. This marked the start of her Hollywood career. She then bagged herself a role the major feature film ‘ The Remains of the Day’ which went on to receive eight Academy Award nominations in the year 1993.

She has also won the Silver Iris Award in the Best Actress category in 2001 European Film festival for her film ‘Aberdeen’. She was one of the richest actors, according to a survey. Her net worth is currently somewhere around $1.5 billion dollars. However, in April 2013, Lena had made a shocking announcement of bankruptcy. Even after earning $150,000 per episode she claimed she had only $5 in her bank account.

Talking about her personal life, it hasn't been very smooth. It has been full of ups, downs and heartbreaks. Lena Headey met her boyfriend Jason Fleming, while filming for the movie, The Jungle book. The couple dated for nine years. They started dating in 1994 and continued to 2003. The reason for their break up is not known. The couple was happy. They had even tattooed each others named in Thai.

Lena found love again with an actor named Johnny Cicco. They met while filming for a movie called The Grimm Brothers which went to become a great hit. They were even secretly engaged for a brief time between 2004-07. They were also about to get married when fate intervened and resulted in their split.  But Lena was not one to give up. She didn’t leave the dating game.

Maybe fate had other plan for Lena in Peter Loughran. She met Peter the same year she had broken up with Johnny Cicco. Lena and Peter met in May 2007 and it was love at first sight for them. They got married immediately. They have a son together named Wylie Loughran born on 31st March, 2010. This marriage didn't last as well. The couple decided to part ways and began to live separately in 2011. The couple filed for divorce a year later on 20th July, 2012 in the Los Angeles Superior Court. The reason for divorce is not known as the coupe cited ‘irreconcilable differences’ as the grounds for divorce.  Maybe we can assume that Lena is just unlucky in love. Their divorce was finalized on 26th December, 2013. The couple has applied for mutual custody of their child. The actress is currently dating Pedro Pascal according to a few rumors.

FAQ: How old is Lena Headey?