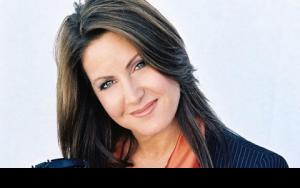 Leslie Marshall is known as an American journalist and actress. She is most famous for being the youngest anchor to host a nationally syndicated radio program.

Leslie Marshall was born in Massachusetts to Jewish and Christian parents. Leslie earned her bachelor's degree from Northeastern University. She acquired her master’s degree from Emerson College for Broadcast Journalism.

Leslie Marshall is currently married and has two children. They got married on June 28th, 1996. Her husband is a Muslim physician. It was rumored that she converted to Islam and is going to extended lengths to keep it a secret, which is the reason why she has formed a pro-Muslim viewpoint. One of their children is adopted from Pakistan and the other one was born after sixteen cycles of IVF.

Leslie Marshall has worked as a talk show host for over two decades. She started her career in Boston as a radio news reporter. She later moved to Miami where she worked as a radio and television reporter. Her work included doing reports on traffic and weather. She also sometimes functioned as a disc jockey.

Marshall was discovered by a Program Director at a talk station in Florida, Miami, when she did an overnight nostalgic music program. She broadcasted a special ‘Remembrance’ hour, where several war veterans called in with their experiences. She finally moved onto work as a radio talk show host at the WNWS station in Miami. She finally landed a huge role after several years of reporting, anchoring, and hosting music programs. She worked for three years in Florida and eventually moved to Buffalo, where she worked at mid-days for the WGR station. She later moved to Houston, where she worked for the KPRC station.

Leslie Marshall’s big break started when she replaced Tom Snyder at the ABC Satellite Radio Network in the year 1992. She has also worked in San Francisco, where she worked for the KGO radio station and hosted a show called Hot Talk on KHTK in Sacramento. Marshall has also stayed in Chicago for a short period, when she worked for WLS-FM, hosting an afternoon drive talk show.

She also hosted a show titled ‘Bay Talk’ on a channel called KRON TV. She moved back to Chicago again and joined WLS. She also started to host a show on WGR-TV titled ‘Beyond the Beltway’. She moved to Los Angeles, where she joined her husband and started to host radio shows on weekends on channels like KABC, KLSX, and KFI. Marshall has also appeared on a variety of shows like ‘The John Gibson Show’ and ‘Hannity & Colmes’.

Leslie is the host for The Leslie Marshall Show which is running for over five years. Leslie Marshall is also a huge fan of blogging and writes frequently for the ‘Huffington Post’.

In addition to these reporting achievements, Leslie Marshall also started acting and made guest appearances on shows like ‘NYPD Blue’, ‘Passions’, ‘General Hospital’, ‘Port Charles', and ‘Desperate Housewives’. She also had a role in the movie, ‘Room 302’. Her most recent film was titled ‘A Mexican Werewolf’.

FAQ: What is Leslie Marshall networth in 2020?