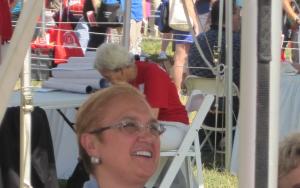 Lidia Matticchio Bastianich is known as an American celebrity chef, author, television host, and restaurateur. She is most famous for owning multiple restaurants and her television show "Lidia's Italy In America."

Lidia Matticchio Bastianich was born on February 21, 1947, in Pula, Croatia. Lidia is the daughter of Erminia and Vittorio Motika. At a very young age, while living under Marshal Tito's Communist regime in Yugoslavia, Lidia, along with her sibling and their mother, fled to Trieste, Italy. After a few years, her father fled Yugoslavia as well and joined the family in Italy.

Two years later, the Immigration office granted their displaced person's application to migrate to the United States. In 1958, twelve-year-old Lidia and her family landed in New York City. Bastianich gives credit for the family's new roots in America to their sponsor, and Catholic Relief Services said: "Catholic Relief Services' brought us here to New York, we had no one. They found a home for us. They found a job for my father. And ultimately, we settled. And I am the perfect example that if you give somebody a chance, especially here in the United States, one can find the way." Lidia started working in restaurants at the age of fourteen, first at a bakery and then later at a pizzeria on the upper west side of Manhattan.

At the age of nineteen, Lidia married Felice "Felix" Bastianich, a fellow Istria-Italian immigrant and restaurant worker from Labin, Istria. She met her husband on her sixteenth birthday, and they got married in 1966. The couple has two children, a son named Joseph and a daughter named Tanya. After their marriage, she and her husband opened two restaurants in Queens. The first restaurant that opened in 1971 was called Buonavia, which means 'good road' in Italian. The restaurant served Italian cuisine created by the most talented Italian-American chef they could find at the time. The success of Buonavia led to the opening of the second restaurant two years later, Villa Secondo, the popularity of which skyrocketed in just a matter of months. After the massive success of their restaurants, the couple wanted to create something on a grander scale. In 1981, they sold the restaurants in Queens and opened a new restaurant in Manhattan named Felidia. This restaurant was also a huge success earning three stars from The New York Times, and they eventually made it into an all-family business.

Despite all the hard work the husband and wife did in building a family business, the couple divorced in 1997, after thirty-one years of marriage. The reasons for the divorce were not clear, but it was presumed that the couple got divorced because of the difference in ideas about business expansion. The biggest argument was that after being successful in their restaurant business, Lidia Bastianich wanted to expand her restaurant, but her husband had something else in mind.

In 1993, when the thriving restaurant, Becco, was opened in Manhattan's theatre district by Lidia and her son Joseph, Felice Bastianich diversified into different areas. He started his travel agency specializing in culinary tourism and began acquiring vineyards in Northern Italy. After his divorce, Felice remarried and transferred his shares in the family business to his two children. Lidia went back to Queens to live with her mother and concentrate on expanding her restaurant business.

FAQ: How old is Lidia Bastianich?

FAQ: What is Lidia Bastianich networth in 2020?

Quick Facts
Help us Edit this article and get a chance to win a $50 Amazon Gift card.
Last Modified: Jul 7 2021
You may also like
articles you may like