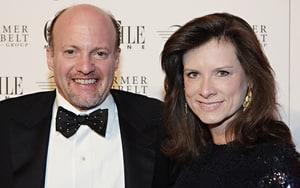 Lisa Cadette Detwiler is known as the wife of Jim Cramer, an American television personality, former hedge fund manager, and a best-selling author.

Lisa Cadette Detwiler was born to Walter M. and Joan B. Cadette. Lisa spent most of her childhood growing up in the city of Millbrook, New York. Her father, Walter was an economist and worked for J.P. Morgan in Manhattan. Her father retired from his job as an economist and was happy to provide a great living for his daughter. Her mother, Joan was an English teacher and she taught at the Dominican Commercial High School in Jamaica, Queens. Her mother retired from her job as a teacher and was happy to reach so many children during her teaching career. Lisa benefited from having a mother who was a teacher because it prepared her for her own studies. She was a brilliant student she attended Trinity College in Hartford, Connecticut. While there, she earned a Bachelor’s Degree in Biology with a specialization in Genetics.

Lisa gained popularity due to her marriage to television personality and author, Jim Cramer. Both Lisa and Jim had been married previously and they both had children from earlier marriages. Lisa had already had 3 children while Cramer had 2. Both were separated and in the middle of getting a divorce when they met. Their first encounter was in 2006 at a Manhattan bar after being set up by a mutual friend. They both were leaving broken marriages and wanted to find someone new.

Initially, Lisa was hesitant to go out with Jim Cramer because he was known for his dramatic on-air personality and behavior. But then the friend who had set them up reminded her that she had been spending way too much time at home watching TV with her dog. The friend really wanted Lisa to go out and enrich her life. After much urging from her friend, Lisa finally decided that it would be best for her if she joined the dating pool.

Eventually, Lisa and Jim started going out with each other after Lisa set up some ground rules. According to Vincent M. Mallozzi of the Times, Lisa was surprised that they hit it off so well. She told Vincent, “I didn’t really care about him as a TV person, but he was so well versed on so many different topics. He had wonderful life experiences to share. And most of all, he placed his children above everything else in life. And after all, I had been through, that really hit home with me.”