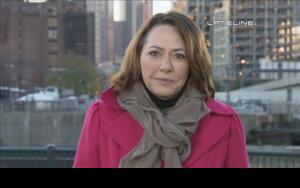 Lisa Miller is an award-winning Australian journalist currently working for the Australian Broadcasting Corporation as the European Bureau Chief.

After growing up in a small town, she worked for several newspapers including The Gympie Times and The Sun. She began working in television with WIN TV and then as a North Queensland correspondent for ABC. She became the state political reporter and was elected to be the president of the Brisbane press gallery. She was co-anchor for state election coverage in both 1998 and 2001.

She was briefly based in Washington as ABC's North American Correspondent between 2001 and 2005, before returning to Australia and being a part of the team that discovered Vivian Solon in the Philippines and was awarded the 2005 Walkley Award for Investigative Journalism. She returned to the United States in 2009 as ABC's North American Bureau Chief where she remained for six years.

She replaced Philip Williams as Bureau Chief in 2015. She has been based in London since September 2015.

Lisa has never been married and despite being in the public eye has never had information about her relationships make the news. She has publicly stated that one of her best and worst habits is being a workaholic. Being consumed in her work has not allowed her to tend to her dating life. She values patience in her circle of her friends because there are long periods where she doesn’t see them. This type of work schedule has prevented her from having many stable romantic relationships.