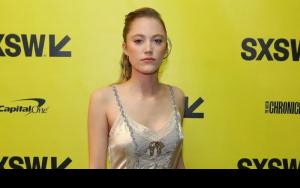 Maika Monroe is an American actress and professional kiteboarder who was born on May 29, 1993, in Santa Barbara, California. Her full name is Dillon Monroe Buckley and her parents are Dixie and Jack Buckley. When she was 17, Monroe moved to Cabarete in the Dominican Republic where she trained as a kiteboarder. Monroe completed her high school education online. She continued her career as a kiteboarder and went on to place second in the International Red Bull Air Competition. She decided to switch to acting and her first paid job was acting in a commercial for Pizza Hut. She made her film debut in 2012 when she landed the role of Mandy in the film "Labor Day". In 2013, Monroe was cast in the psychological thriller film "The Guest". In 2014, Monroe landed the starring role in the horror film "It Follows".

The film became a cult sensation and earned Monroe the nickname "Scream Queen". She also appeared in the 2014 film "The Guest". Her acting career took off after "It Follows" and her next role was in the 2016 film "The 5th Wave". Monroe went on to co-star in the sequel film "Independence Day: Resurgence" where she played the president of the United States daughter, Patricia Whitemore.

FAQ: How old is Maika Monroe?