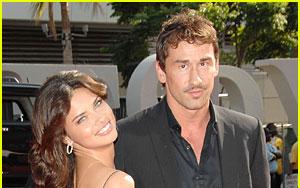 Marco Jaric was born in Belgrade, SR Serbia, SFR Yugoslavia on October 12, 1978. He is said to be 6’7” tall, and weigh close to 224lbs, and this is probably part of the reason that Marco has such an easy time playing basketball.

Marco is not the only star basketball player in his family. His father is Srecko Jaric. Srecko was also a professional Siberian basketball player. Young Marco inherited his height and his ball playing abilities from his dad.

Marco is married to Adriana Lima. Adrianna is a Brazilian supermodel who met Marco and became engaged to him on her twenty seventh birthdays in June of 2008. The couple was married in 2009 on Valentine’s Day. They held the ceremony in Jackson Hole, Wyoming.

Marco and Adrianna have two children. Valentina Lima Jaric was born in November of 2009 and Sienna Lima Jaric entered the world on September 12, of 2012.

As a youngster he began his ball playing career on the KK Red Star basketball team.

He played a season with the Grizzlies and then they reached a mutual agreement allowing him to seek other employment. Jaric signed a contract with Real Madrid in December of 2009. In January of 2011 he signed on with the Montepaschi Bulls until the remainder of that season.

The Chicago Bulls invited him to come play with them during the pre-season and then when the final roster was posted Marco had not made the cut.

Marco Jaric is the only player in history of the game to win the Italian Championship two years in a row, and he was playing for different teams each of those years. In 200 he won with Fortitudo Bologna and returned to win the next year with Virtus Bologna.

Marco is always willing to try and help people who are less fortunate in any way he can. He still works with the Clippers each year around the time of Thanksgiving delivering food baskets to people in need.

He feels a deep sense of commitment and responsibility to the youth of the world and he volunteers his time, and money, to help young people find a way to realize their worth, and their dreams. As a humanitarian Marco Jaric may be a bigger star than he is as a professional basket ball player.

Quick Facts
Help us Edit this article and get a chance to win a $50 Amazon Gift card.
Last Modified: Mar 26 2016
You may also like
articles you may like