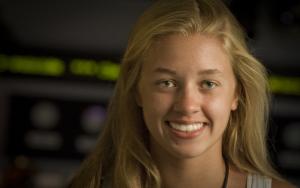 "I find myself attracted to really obscure roles. The scripts that grab my attention are usually dark, intense stories based on true events. I did a film called ‘Soul’, where I played a young girl named Courtney, who’s best friend was raped and murdered in front of her. The film is about how death affects everyone differently and it takes you through the different stages of grief as well."

Born on January 6, 1992 in the United States of America, Megan has comfortably made Los Angeles her happy home for the past 8 years. She was a high school graduate when she moved to Los Angeles at the age of 16 convincing her mother. While acting was not considered a cool activity in her high school, she kept acting anyway. Acting wasn't just a hobby for her. She loved the way she could express herself while acting.

Aspiring American actress and model Megan Murphy is best known for her roles in movies such as "Windows Detention"," Memoria",  and "Soul". Nevertheless, she is also known for her starring roles in Showtime's critically acclaimed series Shameless.

A popular theatre, television and movie actress in the United States, Megan Murphy is not only famous for her acting prowess but also for her off-screen antics.

Not afraid to step outside her safe side to portray her character, Megan is generally referred to by the words such as kind, funny, sweet and entertaining.

Interestingly, she wasn't as expressive as she is now as a kid. Shy and curious kid, Megan would pass her days watching movies or doing some normal things. Fortunately, acting came to her rescue.

Thanks to her parents' encouragement, Megan went on to audition for a summer play at the age of 11. It was a Cinderella play the local college was auditioning for, as an integral part of their summer acting program .

Her parents wanted her to try out something unique in her free time instead of her usual watching movies routine. She went for it, but not for the role of Cinderella. She decided she would portray the less speaking character of the queen. Interestingly, the judges decided that she would be a perfect fit for the role of Cinderella  after her audition. She had thought that she would pretend to be sick on the opening night so that she will save herself from upcoming unknown embarrassment. But she was not someone to give up.

Call it a destiny or good luck, she rocked the stage when the curtain came up. She confidently portrayed the role of Cinderella and surprised everyone by her singing, dancing and acting abilities.

Now moving on to her physique, Megan is not a tall woman with the height of 5 feet and 2 inches. However, she is someone who is known for her fit slim body (probably banana shaped) and lucrative body assets. Unfortunately, her accurate body measurements, birth-place  and net worth are not known. Of course, she is just 24 and has so much to look forward in upcoming years.

Nevertheless, she has a sound fashion sense as well. Her fashion sense is quite inspiring in a way, as she wears clothes that make her feel comfortable. She doesn't jump in the fashion bandwagon directly. However, she has an indirect approach. She is open to suggestions and feedback from her fashion conscious older sister, friends and peers.  Most importantly, she believes in being comfortable with who she is. Moreover, she is not afraid to take risks and mix different styles in the world of fashion. Impressively, she describes her personal style by the terms "hipster noir". Nevertheless, she also believes in the quote "you can tell a lot about a person by the style of shoes they wear. She says she is more into ripped jean shorts, hats, crazy shoes and shorts with tights. Furthermore, she has also said in an interview that she hates jeans.

Talking about her relationship status, we really don't know her current relationship status. Therefore, it will be safe to say for now that she is a single woman enjoying her life.  However, we can verify that she has been in a relationship before. In a post Soul interview, the exquisite actress revealed that she went through a heart break period during Soul's production phase, when the interviewer asked her how she related to her Soul's grief stricken emotional character. She answered the question conveying how it was easy for her to relate her first real life breakup to her Souls' grief stricken character Courtney's insecurities and surprising discoveries related to  her first-love turned husband.

FAQ: How old is Megan Murphy?