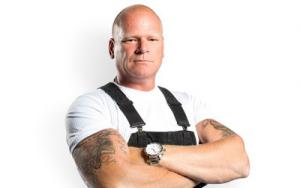 Mike's right arm sports a half-sleeve cover-up tattoo. It depicts a large bulldog folding his arms, wearing his trademark overalls against the backdrop of a brick wall. "Make It Right" is a phrase that is highlighted in a banner. He also has a hammer and saw crisscrossed "skull and crossbones" style that sits just above his elbow. The half sleeve on his left arm displays a black and grey Viking on bended knee, which is a tribute to Mike's Nordic heritage.

Besides being a successful self-made businessman, a father, and a TV celebrity renowned for his home improvement skills, Mike also loves to give back to society. He does so through his foundation called Holmes Foundation Make It Right. On the home page of the foundation's website, Mike's mission statement is to "stop shoddy work at its root and help skilled trades students get the education they need to become top professionals."

Mike Holmes established the Holmes Foundation to increase tradespeople's education and prevent shoddy work due to a lack of understanding. Scholarships and bursaries are awarded by the foundation to students studying residential buildings.

Mike constantly finds new ways to combine his charity work with his professional business. The latest example was the Helmets for Charity auction, where the initiative received generous personal donations. The auction sold numerous construction helmets with 28 beautiful designs in total.

FAQ: How old is Mike Holmes?