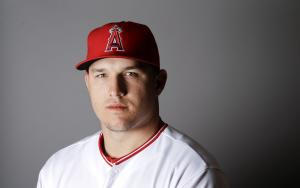 American professional baseball center fielder Michael “Mike” Nelson Trout, also known as “The Millville Meteor” was born on August 7, 1991, in Vineland New Jersey. He was the son of the great University of Delaware baseball player Jeff Trout and was raised together with mother Debbie Trout along with two older siblings Teal and Tyler.

Little Mike began with “Little League” with his position as a shortstop and wears the number 2, inspired by his baseball pinup Derek Jeter of New York Yankee. During high school, Trout practiced basketball and baseball during his years at Millville Senior High School in New Jersey and was able to throw a “no-hitter” over Egg Harbor Township High School. He made his ultimate high school record by being a pitcher and shortstop with 18 home runs. By 2009, he played baseball for Carolina University prior the MLB Draft.

His combination of speed and power made him an above average center field defender and an efficient baserunner.

Kicking off his professional baseball career, Trout was drafted by Angels wherein he played for Arizona Angels of the rookie-level Arizona League. He was actually considered by Baseball America as Angel’s third best prospect and tops 85th best in all of the players and earned a salary of huge amounts. After a .362 with a .454 on-base percentage and a .526 slugging percentage in six home run, 39 RBIs and 45 stolen bases in 82 games, he was chosen for the All-Star Futures Game. Next to this huge success, he was endorsed to the Rancho Cucamonga Quakes and has won consecutive Silver Slugger awards.

In 2014, Trout was hailed as the American League MVP with net worth $144.5 million for a 6-year contract. True enough; the salary is not just the wow factor for Mike Trout but the awards that he bags as well. Recently last year, he took home the Best Major League Baseball Player and the MVP award for Major League Baseball All-Star Game.

Being also the youngest player at the age of 23 to reach 10 home runs and stolen bases is something to record for the MLB history.

Going up close and personal, Mike dated his now girlfriend Jessica Cox who is also the sister of his co-Angels draft player Aaron Cox. Trout admitted that Jessica is a close sweetheart and a best friend to him since high school in Millville. In fact, one of the cute things these couple owns together is a horse pet. Aside from baseball, Trout also doubles a business man in the Cumberland County of New Jersey.

By 2012, he appeared on his first ever sports drink advertisement with BodyArmor SuperDrink which he also co-partnered and co-invested in. In fact, he was the reason why Angels changed their official drink. The following year, he appeared on Subway’s commercial for Super Bowl XLVII and also sponsored SuperPretzel.

Apart from commercial testimonials, he also pushed the campaign for free spaying and neutering of pit bulls.

Lastly, in 2014, footwear giant Nike gave him his biggest break by being the first Major League Baseball player to have a signature shoe pair.

FAQ: How old is Mike Trout?