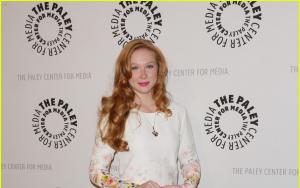 Molly Quinn aka Molly Caitlyn Quinn is an actress belonging to America. Molly took birth on 8th October 1993 in Texarkana, U.S. She has done many movies, theaters, and TV shows. She is active in Industry from 2006 to present. Molly Quinn did some Noble work to such as donating money for Cancer Research in the United Kingdom. Her mother name is Dianne Quinn and Father is Tom Quinn.

There is no news in media about Molly Quinn's Academic education details. From her little age, she used to learn to act. Producer cum Director Martin Beck was her teacher, instructor, and mentor in term of learning acting. When she turned into six years of age, she participated in a play named as The Nutcracker. She participated in the programs directed by Linda Seto at The Young Actors Studio when she was 6. Osbrink Talent Agency gave her the first break by made her signing a contract with them just after she completed her six-month training in acting. After that, she also signed a contract with Ellen Meyer Management and her journey began this way.

She played the role of Teen with Pinups in Walk Hard: The Dewey Cox Story in 2007. In 2009, she acted as Paula in My One and Only, as Belinda Cratchit in Disney's A Christmas Carol, as Esmee Johnson in a short film The Sacrifice. In 2012 she acted as Erica in The First Time, as Princess Bloom in Winx Club 3D: The Secret of The Lost Kingdom. In 2013 she played the role of Princess Bloom in Winx Club 3D: Magical Adventure, as Gretel in Hansel & Gretel Get Baked, as Super Girl Kara in Superman: Unbound and as Melissa Fitzgerald in We're the Millers. In 2014, she acted as Abby in The Shift.

She is playing the main role as Alexis Castle in Castle since 2009 to present. She acted as Jenny in Avalon High in 2010. She played the voice of Eunice in Ben 10: Ultimate Alien in 2011. She again played the role of Princess Bloom in a TV show Winx Club from 2011 to 2015.

She played Eve Brea in a video game named as The 3rd Party in 2011. She was a narrator in an audiobook named as City of Fallen Angeles in 2011. She performed a Cameo in a music video, Release the Panic. In 2015, she played Hermione Granger in Princess Rap Battle which was a YouTube video.

She won an Award in Monaco International Film Festival in the category of Best New Comer, Short Film for her role in The Sacrifice in 2009.

As per media report, Molly Quinn is dating Chris Tavarez from 2010 till present. They both starred in Avalon High and their relationship started from the set of that TV Show. Her boyfriend is one year elder than her and they seemed to be a cute couple of the industry. It's considered as a long-term relationship between them.

FAQ: How old is Molly Quinn?