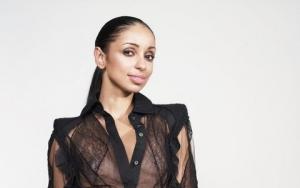 On October 10, 1979, Mya Harrison was born in Washington, D.C., and is the youngest of three children. Sherman, her father, is an African-American musician and vocalist, and Theresa, her mother, is an Italian-American accountant. Her two younger brothers, Chaz and Nijel, raised her in a suburb of Washington, D.C. She used a spoon as a make-believe microphone to emulate Michael Jackson as a child while wearing her mother's high-heeled boots. Mya took violin lessons throughout her childhood, but her favorite after-school pastime was dancing. She began ballet training at the age of two in 1982 and jazz and tap lessons at four. Her interest diminished around the age of 10, but it was renewed at the age of twelve after she had lost it for several years. Her tap dancing abilities allowed her to learn with Savion Glover, one of the country's most well-known tap dancers, when he visited Washington, D.C., for a workshop. Glover later chose Mya for a solo performance at the Kennedy Center for the Performing Arts.

Mya had to deal with harsh comments about her ethnic background during her childhood, but her skills as a dancer helped her transition into adolescence and deal with peer pressure. Mya would later use her experiences as a famous singer to talk to girls' groups as part of the Secret of Self-Esteem program for teenagers, which addressed body image, peer pressure, and gender stereotypes. After learning moves from music videos, she worked as a hip-hop dancer for BET's Teen Summit from 1996 to 1998. She also started teaching a hip-hop and jazz dance program for kids in Camp Springs. Mya's musical side took over at the age of 15, and her professional musician father assisted her in honing her vocal abilities. When Mya's father discovered his daughter was serious about pursuing a career in music, he began shopping her demo tape around, finally attracting the attention of University Music president and CEO Haqq Islam. Mya took a few classes at the University of Maryland, College Park, after graduating from Eleanor Roosevelt High School in Greenbelt, Maryland, at 16. Still, her primary emphasis was the recording studio.

Before breaking into the music industry, she was born into a musical family and debuted on BET's Teen Summit. She was signed to Interscope Records in 1996 and released her self-titled debut album in April 1998. The album was a critical and financial success, with "It's All About Me" becoming her first top ten songs. "Ghetto Supastar (That Is What You Are)" and "Take Me There," her next two singles, continued to enhance her profile and chart success around the world, with the former earning her first Grammy nomination. Fear of Flying, her second album, was released in April 2000 and quickly became a worldwide hit, thanks to the singles "Case of the Ex" and "Free." Harrison's meteoric rise continued in 2002 when she received her first Grammy Award for Best Pop Collaboration with Vocals for Labelle's 1975 song "Lady Marmalade," which she performed with Pink, Christina Aguilera, and Lil' Kim and which topped the charts worldwide.

Harrison released her third studio album, the quirky Moodring, in July 2003, after taking a more active role in the production of her music. The album was awarded gold by the Recording Industry Association of America (RIAA) and featured the hit "My Love Is Like...She started her independent record label, Planet 9, and competed in Dancing with the Stars in season nine, coming second between those two albums.

Harrison continues to release songs regularly as an independent artist. She released three R&B-influenced EPs in 2014: With Love (2014), Sweet XVI (2014), and Love Elevation Suite (2014). Harrison's Grammy-nominated seventh album, Smoove Jones, was released in 2016. TKO (The Knock Out), her follow-up, was released in April 2018 to mark the twentieth anniversary of her debut album.

Harrison began her acting career alongside her music career, starring LL Cool J and Omar Epps in the 1999 thriller In Too Deep. She participated in films including Chicago (2002), Dirty Dancing: Havana Nights (2004), Shall We Dance? (2004), and Cursed as a supporting actress (2005).

Harrison has received numerous awards in the genres of pop and R&B music for her contributions to music. Ma was named one of Billboard's Hot 100 Artists of the 2000s in 2009, and she was ranked 97th. She has sold over 3.2 million records in the United States and 7 million albums worldwide as of October 2020.

Sade Adu, Janet Jackson, Michael Jackson, Stevie Wonder, Aretha Franklin, Prince, Chaka Khan, Minnie Riperton, and Madonna are among Ma's musical influences. Madonna's daring and courage are praised by Ma, as is Steve Wonder's ability to hear, perform, and feel the music, as well as his capacity to get other people to handle it. Minnie Riperton is Ma's favorite female artist, and Prince is her musical hero; she says, "He's someone who isn't afraid to take chances. He's a great performer and all-around entertainer. He's a genius, in my opinion."

Lena Horne and Liza Minnelli are two of her role models.