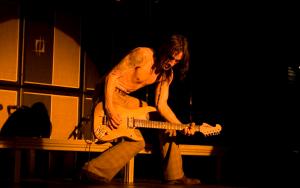 Nuno Bettencourt took birth on 20th September 1966. He is an Portuguese – American lead singer, lyricist, guitarist and a record producer. He was born in Praia da Vitória, Portugal to Aureolina da Cunha Gil de Ávila and Ezequiel Mendes Bettencourt. When he was only four years old his family moved to Hudson. He initially had almost no interest in music and he, normally used to spend his evenings playing soccer and hockey by himself. His interest in music developed much later in life when he took classes for drumming and guitar. After that, there was no turning back for Nuno. He went to be one of the best singers of his time.He was a very talented man and went on to have much success in life. He is best known for being the lead guitarist for the Boston rock band Extreme.

Nuno has played a lot of the instruments and wrote diverse songs from different genres that give him very good exposure and he became relatively famous. He is best known for his songs ‘ More than Words’ and ‘ Hole Hearted’ which went on to reach the number one and four positions in the Billiards top 10 list of that time period. Nunos has a current net worth of 10 million dollars.Along with his success in the music industry, Nuno has also released a line of custom designed guitars known as N-Series that are also very popular. Though Nuno is very successful professionally, he doesn’t have the same luck in his love life. His love life has been full of ups and downs and heartaches.One relationship after another has failed for Nuno and his professional life had seemed to complicate his love life and his chance at a long-lasting marriage and/or relationship.

Before getting married, he dated Christina Applegate in 1990 and also devoted a few songs to her. Their relationship was very short lived and they broke up in the year 1992. Though the reason for their break up is not known to this day, one thing we can presume is that it was not due to an affair. Nuno has also dated Martika who was famous for her role in Kids Incorporated. Martika was a lead singer that had once said that Nuno was a very handsome guy and she would like to collaborate on a song with him. One thing led to another, and they started dating after releasing an entire album together. The couple was together for the maximum period of a year before splitting up indefinitely. They broke up in the year 1990.

Nuno was also rumored to have dated Heather Butcha and Chase Alden at some point during this time. Nuno Bettencourt ended up marrying a front singer of a group named Suze de Marchi in the year 1994. He has 2 children with her, a girl born on February 2nd, 1996 they had a daughter named Bebe Orleans, and on August 12th, 2002 they had a son named Lorenzo Aureliano. Suze moved to Sydney in 2009, after a gig in Boston and later Los Angeles.

FAQ: How old is Nuno Bettencourt?

FAQ: What is Nuno Bettencourt networth in 2020?