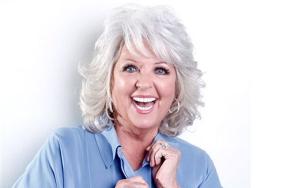 An American celebrity chef and cooking show television host, Paula Ann Hiers Deen presents her exquisite love for food at her own restaurant The Lady & Sons in Savannah, Georgia. Her style of cooking primarily includes hand-me-down Southern cooking that she learnt from her grandmother.

She was born on January 19 1947 as the daughter of Corrie A. Hiers and Earl Wayne Hiers, Sr. After her parents’ death when she was 23, she started focusing on cooking for her family. She had been married to Jimmy Deen from 1965 to 1989. Her divorce left her with only $200 and she had a hard time raising her two kids and her younger brother. She did odd jobs like hanging wallpapers, working as a bank teller and selling insurances and real estate. She then decided to start a catering service where she made sandwiches and meals, and her sons Jamie and Bobby used to deliver them.

Her home business, The Bag Lady was so successful that she moved in with a restaurant called The Lady. In January 1996, she opened up her own restaurant The Lady & Sons in Savannah. USA Today named her restaurant the “International Meal of the Year” in 1999. Another of her restaurant opened up in 2008- Paula Deen Buffet at Harrrah’s Tunica Casino in Tunica Country, Mississippi. In September 2009 she introduced her own line of desserts at Walmart including Apple Crunch Top pies, Dark Rum Pecan, and Gooey Butter bars. On April 2015, she officially opened the doors to her restaurant: Paula Deen’s Family Kitchen in Pigeon Forge, Tennessee.

In 1997, Deen herself published two books The lady & Sons Savannah Country Cooking I and II, both featuring traditional Southern recipes. Collaborating with Martha Nesbit, she published two more books. Her life story is even featured in Extraordinary Comebacks: 201 Inspiring Stories of Courage, Triumph, and Success. She is also actively involved with the Food Network. She met Gordon Elliott through her friend Erin Lewis, who introduced to her then agent Barry Weiner, the owner of Artist’s Agency. She travelled with Elliott through the city for a series of Doornock Dinners. Her own show Paula’s Home Cooking started in November 2002. Since 2005, she started giving two more shows- Paula’s Party and Paula’s Best Dishes. Due to various disputes and controversies following her admission that she had used racial alurs, her contract with Food Network was not renewed. She opened her own Paula Deen Channel on Roku on March 2015. On 2007, she won the Daytime Emmy Awards for an Outstanding Lifestyle Host for Paula’s Home Cooking.

Deen has been facing various criticisms regarding the high amounts of salt, sugar and fat in her recipes. For her book Cookbook for the Lunch-Box Set, celebrity chef Anthony Bourdain commented that he "would think twice before telling an already obese nation that it's OK to eat food that is killing us". On August 2013, Deen faced the court on for charges that she had made derogatory remarks regarding African Americans in the presence of a female employee with bi-racial African-American father. During this period Food Network, Walmart, Smithfield Foods, her publisher Ballantine Books together cancelled cookery programs, publishing deals and endorsement contracts.

Deen married Michael Groover in 2004. She has two children from her previous marriage- Jaime and Bobby Deen, who are the co-owners in her restaurant The Lady & Sons. She was diagnosed with type 2 diabetes for the last three years.

FAQ: How old is Paula Deen?