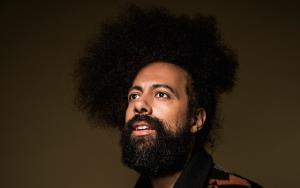 Reggie Watts is an American comedian and musician who was born on March 23, 1972, in Stuttgart, Germany. His full name is Reginald Lucien Frank Roger Watts and he is the only child of his mother Christiane and his father Charles Alphonso Watts. His father was in the Air Force and he moved around a lot while he was stationed in Germany and Spain. Watts eventually moved with his family to Great Falls, Montana where he attended Great Falls High School. He graduated in 1990 and moved to Seattle, Washington when he turned 18 to study music at the Art Institute of Seattle. Watts went on to study jazz at Cornish College of the Arts and played in a number of bands in Seattle. Watts classifies himself as a "disinformationist" and describes his goal as to disorient the audience. Starting in 1996, Watts began recording albums and became the front man for the hip hop group "Maktub". Watts recorded five albums in an eight-year period but didn't release his first solo single until 2005. He went on to appear in the IFC series "Comedy Bang! Bang!" and is currently the leader of "The Late Late Show with James Corden" house band.

FAQ: How old is Reggie Watts?