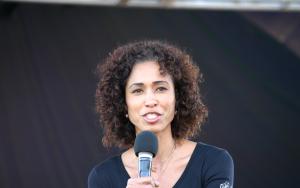 Sage Steele is a very sharp and out of the ordinary anchor. She is the main host of SportsCenter On The Road. Along with that, she also hosts the weekend editions of NBA Countdown on ABC, the year 2016 to 2017 marking her fourth season.

Steele was born to an African American family on the 28th of November, 1972, in the Panama Canal Zone. Since her father was in the army and was always moving to different places for work, she did her schooling in many schools. She completed her high school in Colorado and Indiana. She did her graduation in journalism in the Indiana University and completed it in 1995.

Prior to her hit ESPN career

Sage worked in the field of journalism soon after her graduation and her career debut was in WSBT television as a sports reporter, in the year 1995. She stuck to that job till 1997. She then moved to working with CBS as the morning sports reporter on weekends, and a general reporter during the weekdays. There, her responsibilities included covering auto races and local college and high school events. She worked there for only one year, leaving in 1998.

She continued to work for several channels, including Fox News and ComCast SportsNet. During her reign at ComCast SportsNet, she remained the main anchor and reporter for the Baltimore Ravens.

In 2007, she joined ESPN and hosted the evening sport show. That is not all though. In an interview, she revealed that in the year 2004 she was offered this particular job but she had to turn it down due to her being pregnant with her second child.

FAQ: How old is Sage Steele?