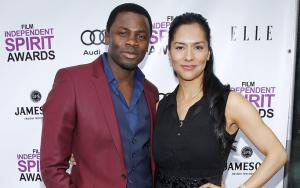 One of the Hispanic acting beauties is Sophia Adella known for her lead role in the movie Knockout. She has managed to keep her life history a secret and from the media all this time. The only thing that she has revealed to the world is that her real m birth name is Sophia Adella Hernandez. She is 1.64 m tall, and a stunning beauty as well fit for TV. Apart from Sophia Adella managing to hide her private life to the public, she is married to fellow actor Derek Luke. Luke is now forty years old and shot to fame with his role in the film ‘Antwone Fisher’. In the movie he played the character Antwone and went by the nick name ‘Fish’. Recently, Luke has been on the limelight for appearing on the TV hit series ‘Empire’. He takes the role of a bodyguard named Malcolm.

The two famous actors have been known to date for the longest time ever. They met at a workshop in Los Angeles, California, when they both met at a workshop on how to find ones purpose in life. It seems divorce is not in their vocabulary as they got married in 1998. That must be some very deep love, or some real determined patience on their part. They have not yet disclosed whether they have any children, or if they intend to get any kids in the future. There was a rumor though in March 2007, that they were expecting their first child. This has never been substantiated.

One of the latest controversies in their life is when some people made some racial comments about Sophia Adella, on the social media. Some alleged fans made some slurs about Sophia being a different race from Luke who is of a black descent. This seemed to infuriate Luke who never took it lightly and immediately stated his mind on instagram. Quite impressive he stated that she is Hispanic and she belongs to him. In addition, she has a heart of gold. This dude is quite a defender. No wander they have been together for over 17 years now.

Sophia Adella has had quite a share on the screen for a long period of time. She has featured in a number of hit movies. Which include, ‘Knock Out’- where she plays a hard core fighter, The ‘Rally LA’, and the ‘Spartan’. She has also made some appearance in films like 40, Lying in wait and many more. As stunning as she is Sophia Adella is still acting and we expect her in many more roles in the future.

A beauty like Sophia Adella is expected to have more than one stream of income. Just like her private life, she has also managed to keep her salary a secret. Not much is known about her net worth. But being married to another seasoned actor; Luke, we can try associate their income and net worth. Currently, Luke is believed to have a net worth of 5 million USD. They must be having a good life with their acting careers on the pick.

FAQ: What is Sophia Adella networth in 2020?