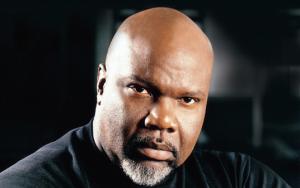 Thomas Dexter Jakes, Sr., also known as T. D. Jakes, is an American bishop, author, and filmmaker born in New York City. He serves as the bishop of The Potter's House, a nondenominational megachurch in the United States. Jakes's church services and evangelistic sermons are broadcast on The Potter's Touch radio station in Los Angeles.

Thomas Dexter Jakes was born on June 9, 1957, in South Charleston, West Virginia. Jakes grew up in Vandalia, where he attended local Baptist churches. Having a caring attitude since his childhood, Jakes looked after his stepfather as a teenager while working. Feeling a call to the ministry, he enrolled in West Virginia State University and began preaching part-time in local churches. After deciding to drop out of the university, Jakes took a job at the local Union Carbide and continued preaching part-time. Leaving college early turned out to be a good omen for him as he immediately became a pastor in 1982.

Jakes met Serita Jamison and eventually married her in 1981 when he was 24 years old. Since their wedding day, the couple encountered the ups and downs of married life without any thoughts of divorce. They both have been very faithful to each other. His wife is the First Lady of his church. Having a theatre background and mass communication skills, she has always served alongside her husband in all the ventures he's carried out.The loving couple has five children, and they gave birth to 3 sons and two daughters.

It appears that due to his busy schedule and services towards society, he was not able to pay much attention to his kids, especially his two elder sons. Despite both sons falling into the path of outlaws, the parents have been kind enough to stand by them and support them whenever possible. They always have an open door when their boys decide to walk the path of righteousness. Jakes has moved his attention toward his family and was heavily involved in his second daughter's marriage. He has a lot of help at his church which has freed up time to focus on his family.

It appears that, Jakes is being considered a mentor, a spiritual father, a role model, a coach and an example to many within and outside the united states of America. His books and sermons are being used all over the world both for morals and spiritual learnings.

In 1982, T. D. Jakes became the Greater Emanuel Temple of Faith pastor, a small Montgomery, West Virginia independent Pentecostal church with about ten members. Over the next few years, the church grew, drawing an integrated congregation that helped increase Jakes' reputation as a speaker and pastor. He moved the church twice, first from Montgomery to Smithers and then to South Charleston, where the congregation grew from about 100 members to over 300. He began a radio ministry, The Master's Plan, that ran from 1982 to 1985.

After the 1990 move to Charleston, Jakes's congregation grew, and he began focusing on the spiritual needs of the women in his church who had been abused and abandoned. He started a Sunday School class for them called "Woman, Thou Art Loosed," He encouraged the women to use their past pain as a foundation for new growth. He later started a similar class for men, which he called "Manpower."

In 1993, Jakes self-published his first book, drawing on his experiences working with the women of his congregation. Woman, Thou Art Loosed would become Jakes' signature work and a religious, national bestseller. He also began a new television ministry, Get Ready which aired on Black Entertainment Television and the Trinity Broadcasting Network. Also, in 1993, Jakes moved his church, yet again, to Cross Lanes, West Virginia.

His ministry continued to expand, prompting the founding of the T. D. Jakes Ministries organization to oversee his work beyond the church itself. He continued to write and publish, spreading his message of spiritual healing to new audiences. In 1994, he held the first of what would become a series of conferences for ministers and their spouses, "When Shepherds Bleed."

Jakes' family and employees relocated to Dallas in 1996, where he founded a megachurch on a hilltop with a massive land area. He purchased Eagle's Nest Church, a large Dallas church with a 5,000-seat auditorium and a 34-acre campus. He renamed the church to The Potter's House and was eager to preach to his congregation of 30,000.

He is now the bishop of The Potter's House megachurch. Jakes' church services and evangelistic sermons are broadcasted on The Potter's Touch, which airs on multiple outlets including Lightsource.com, the Trinity Broadcasting Network, Black Entertainment Television, the Daystar Television Network, etc. Word Network.

Apart from being a bishop in a church located in West Virginia, Jakes is also a well-known writer and actor. He writes spiritual books and has acted in some movies; a few were also produced.

Although Jakes was converted and ordained within Oneness Pentecostalism, he revealed in an interview with Mark Driscoll in 2012 that he affirms the Trinity. However, Jakes did not document the eternality of Trinity's persons, which Oneness churches deny. Jakes is a strong advocate of abstinence and has made appearances on the subject ranging from Good Morning America to Dr. Phil. His net worth is estimated to be around 18 million dollars.

During the 46th Grammy Awards in 2003, Jakes' album A Wing and a Prayer took home the award for "Best Gospel or Chorus Album."

"Live at The Potter's House," his gospel album, has also been nominated for Grammy and Dove Awards, among other accolades. Jakes was designated one of America's "Top 10 Religious Leaders" by Religion and Ethics Newsweekly, a publication produced by PBS Religion and Ethics. Jakes was featured on the cover of Time magazine's September 17, 2001, issue, with the intriguing question, "Is This Man the Next Billy Graham?" Jakes was interviewed for the cover story.

Jakes had his DNA tested for the PBS documentary African American Lives. The results revealed that he is descended from the Igbo people of Nigeria.

Several family members have speculated that he is also descended from them through his grandmother, based on his family history. Opera named Jakes in SuperSoul 100, a list of visionaries and prominent leaders compiled by Oprah in 2016.

Quick Facts
Help us Edit this article and get a chance to win a $50 Amazon Gift card.
Last Modified: Aug 25 2021
You may also like
articles you may like