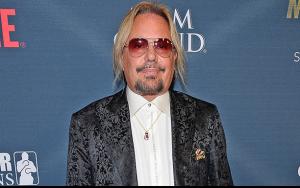 Vince Neil was born on 8th February 1961 in California. His parents are Clois Odie Wharton and Shirley. He has mixed ancestry of Mexican (from mother’s side) and Native American (from father’s side). He attended Royal Oak school for his high school education. Prior to that, he attended Sunflower Intermediate school. His family moved to various places during 1960s. They finally settled in Glendora. He was interested in surfing, music, football, wrestling, baseball and basketball during his teenage. He was inclined towards music from a very young age. Today, he is a famous musician and a vocalist. He is famous for Motley Crue and heavy metal.

In 1979, he was noticed by people while performing with his band. He joined Motley Crue in 1980. He was recommended by his High School friend Tommy Lee. He introduced Neil when Motley Crue was looking for a lead vocalist. The band released its first album in 1980 itself called “Too Fast for Love”. They released various hits during the entire 80s including ‘Shout at the devil’ (1983), ‘Theatre of Pain’ (1985), ‘Girls, Girls, Girls’ (1987) and ‘Dr. Feelgood’ (1989). All these albums holds great values as they took the band really high in various ways.Neil used to take part in celebrity racing very often. He loved that sport so much that he formed Vince Neil racing. However, he retired from racing in 1992. The reason behind that he crashed his car in the 3rd lap during racing once. In the same year, Motley Crue parted ways with Neil. He received $4 million from Warner Brothers for a solo deal. He also filed a law suit against Motley Crue for getting 25% of profit after being dismissed from the group. His first single was released in 1992. IN 1993, he released his first solo album named as “Exposed”. It started off at number 13 at the charts of Billboard. The album also featured few other members. The band went on a tour after this opening for Van Halen. He released various singles for the same album namely: “Can’t change me”, “Sister of Pain”, “Can’t have your cake”. He released another album in 1995 named as “Carved in Stone”. The album was recorded. However, it was kept on hold as Neil’s daughter wasn’t keeping well and he was busy with that. The album did not earn great name. His contract with Warner Brothers also came to an end.

He has been married 4 times in his life. His first marriage ended in 4 years. He got married to Beth Lynn in 1981. They headed for divorce in 1985. His second wife was a mud wrestler named as ShariseRudell. They have 1 child. His 3rd wife was actress Heidi Mark. After that he got married to Lia Gerardini. More information about him can be collected through his mini bio available at IMDB’s website. Apart from this, his biography is available for his fans in various famous websites e.g. Wikipedia. He has an estimated net worth of around $50 million.

FAQ: How old is Vince Neil?