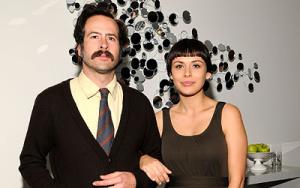 Ceren Alkac was born in Izmir, Turkey. She is a former model and actress that is known for being the wife of famous actor and former Scientologist, Jason Lee.

Ceren and Jason met in 2007 at a concert in Britain. They instantly hit it off and combined to form a passionate and deep connection. They were so in love that they decided to get married in less than half a year later when they tied the knot in July of 2008. Their wedding ceremony took place in Norwalk, California.

Their first child was a daughter named Casper. Casper was born a month later after their wedding, in August of 2008. In 2012, the couple had their second child, a boy named Sonny.

Divorce Because of Scientology

Although they seemed very happy in their marriage, they were hiding tension in their union. At the end of 2015, the couple announced their divorce. There was speculation that the divorce came about because of Jason Lee’s involvement with the Church of Scientology.

Like other celebrity couples at time such as Tom Cruise and Katie Holmes, they had to answer to all the Church of Scientology’s requests. Ceren was stunned when she had to give personal information about her sexual life with her husband. For her it was a big intimacy violation, one that she was not going to accept.

Sources say that Jason Lee became very harsh towards her because of her refusal cooperate. They started to fight because he strongly believed in his Church and felt that they needed to obey the Church’s rules if they were going to achieve ultimate self-development and reach the ultimate peak of enlightenment.

Even though his beautiful model wife tried to put some sense into him, he refused to deny the Church’s requests.

Jason Lee’s ex wife, Carmen Llywelyn also claimed that his affiliation to the Church was the reason for why they got a divorce. She also didn’t want to give intimate details about their sexual life either. She said that most of the questions were related to sexual positions and she did not feel comfortable answering them. She suspected something fishy because she felt that there was no reason that the Church should know about their most intimate details. It was gross spying behavior that was being disguised as a religious ritual. She told the web blog Gawker, "I started to feel like he was forcing Scientology on me, past the point where I didn't want to go any further. He would never stop talking about it. It became a source of contention, and I realized that unless I accepted Scientology the way he did and the way he wanted me to, we would most likely cease to know each another.”